Today’s team review is from Sean, she blogs here https://ebookwormssite.wordpress.com

Sam has been reading New York 1609 by Harald Johnson 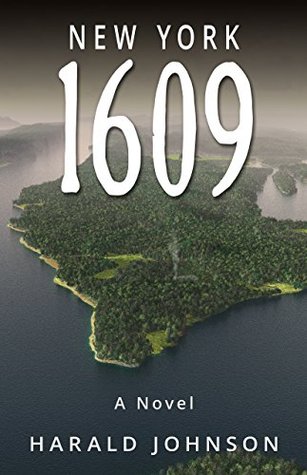 This novel tells the story of the birth of New York, from its early days in 1609 and the arrival of Henry Hudson on the river that now bears his name, to the emergence and consolidation of the Dutch in the late 1640’s.

It is told, in the third person, primarily from the point of view of Dancing Fish, a young native in 1609 whose grandfather was white.

Dancing Fish: Orphaned aged about eight, he never feels fully accepted by his tribe, the Manahate. He has visions, and struggles to find his place. However, he grows in strength and presence as he gets older. He invents ways to do things faster, or more efficiently, and slowly his ideas get adopted.

High Limb: Dancing Fish’s great rival, for power in the tribe and for Willow. He grows into a powerful warrior.

Marie Boucher: Wife to deadbeat Jakob, she is a Walloon woman who from poor beginnings grows to wealth.

Willow: Love interest of both Dancing Fish and High Limb, she becomes the epitome of native women, strong and resourceful.

We open with the rescue of the young Dancing Fish, as his parents are drowned in a raging river. Fast forward five years, and the young boy is the first to spot Henry Hudson, as Hudson discovers the mighty bay and river. Initially in awe of these “Spirits” or “Salt People”, the restless boy (with the agreement of his Sechem or Chief) travels upriver with the Europeans, ostensibly to guide them, but also to learn their language and ways.

His mentor, Owl, tasks him with discovering whether these people will be good or bad for his people, in accordance with an old prophecy. This is a question that plagues him for the rest of his life.

On this journey, and the longer he spends with them, he realises they are not god-like. He sees they have great technology, but are also morally and behaviourally less than his own people.

The natives take more time and care over the prophecies, and initially do not think these Salt People are much of a threat. Theirs is a complex and considered response to the newcomers, and alas as we know a fateful one. We get a great insight into how these societies worked, with a thread of open discussion, mutual respect and honesty running through it. On both the European and Native side there are some superb characterisations, and the characters are fully realised human beings with all the flaws and strengths.

We also get a feel for the relatively simple (to us) life of  young native, fishing, hunting, and playing. It was of course a hard life, with bouts of food shortage, inter-tribal conflict, and the possibility of being mauled by a bear, etc., but there is an affinity with the land that was integral to their way of life, and speaks to a deep appreciation of and respect for the earth, which we are only truly re-discovering now.

As the years pass, more traders come, and the natives become more experienced in dealing with them. However, the tribes are greatly reduced by the effects of Fever (we know now it was smallpox and other diseases) The two young tribesmen (Dancing Fish and High Limb) watch on as their clan is devastated, and High Limb learns trading lessons from the White Man that stays with him for life.

They also find Claude Boucher, abandoned feared lost by his shipmates, who through that winter comes to share fully in their life. In return, he teaches Dancing Fish Dutch, English and French, and the rudiments of writing.  This skill comes in very useful as the novel progresses, as the traders begin to put down roots on the island Mannahatta. We see how the natives begin to get seduced by the Salt People’s goods, kettles, and knives, and how they begin dipping their toes into trade, eventually exploiting the white man’s love for tobacco, and in turn exploited for their love of the Fire Drink.

We follow the evolution of the Dutch colony of New Amsterdam, from its abject beginnings as effectively a shanty town, to one which was building a fort, and a stone Town Hall. The filth, grime and grubbiness of this is starkly contrasted with the semi-nomadic way of life of the natives, who largely are cleaner, more adapted to the environment conditions, and completely self-sufficient.

Into the last section of the omnibus, we see that growing numbers of settlers leads to an imbalance in the relationship, and the first of the infamous  land purchases and treaties are signed. This leads to what could have been an avoidable outcome, or war and hostilities between the two cultures. Dancing Fish and High Limb are leaders in this fight, but also have their own inter-tribal difficulties, with other stronger tribes now preying on the enforced weakness of the Manahate. Through his intelligence and inventiveness, and with some help from Marie, Dancing Fish is able to stave off total disaster, but there are consequences for him and his people, which play out until the very end of the novel.

A thoroughly good read, with lively engaging characters, clever blending of real and fictional personages, a strong historical narrative, and some excellent plot twistings throughout. I really enjoyed this entertaining book, and recommend it.