The Earl’s Countess of Convenience by Marguerite Kaye

The Earl’s Countess Of Convenience is an historical romance set in 1827.

Eloise Brannagh and her sisters were taken under the wing of her Uncle Daniel’s household when their parents died in an accident at sea.

Alexander Sinclair is a friend of her uncle and he has a marriage proposal for Eloise. In just two months he needs a wife, so that he can inherit his family estates and prevent his greedy cousin’s claim. However, Alexander is wedded to his job at The Admiralty and any marriage must be in name only.

The volatile relationship of her parents has put Eloise off any thoughts of a romantic union with a husband, but Alexander’s proposal offers her financial independence that she could never hope to achieve as a spinster. She readily agrees and the pair create a story that makes their sudden marriage seem plausible. Nevertheless, this novel wouldn’t make for such an intriguing read if there was no a hitch in their plans.

I liked Eloise’s strong character and her open nature enriched the plot. I also enjoyed how she peeled away Alexander’s secrets and wore him down. A sprinkling of heated romance keeps the story interesting and Alexander’s garden surprise for Eloise was an absolute delight. What is it? You’ll have to read the book yourself to find out, my lips are sealed!

A countess in name only…

…tempted by a night with her husband!

Part of Penniless Brides of Convenience: Eloise Brannagh has witnessed firsthand the damage unruly passion can cause. Yet she craves freedom, so a convenient marriage to the Earl of Fearnoch seems the perfect solution! Except Alexander Sinclair is more handsome, more intriguing, more everything than Eloise anticipated. She’s set her own rules for their marriage, but her irresistible husband might just tempt her to break them! 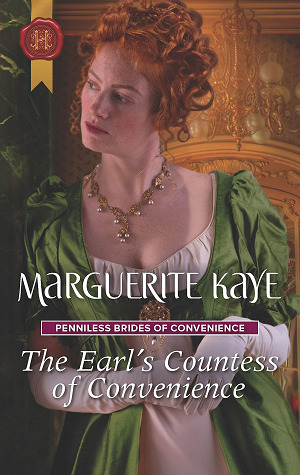