Terry has been reading Jane The Quene by Janet Wertman 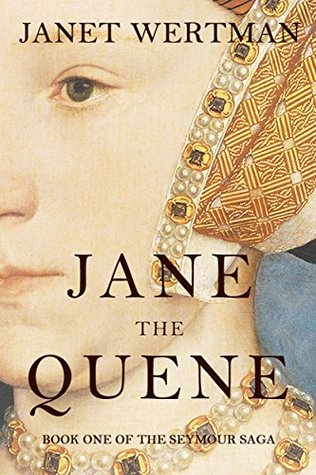 A light piece of historical fiction that, on the whole, I liked.  I was tentative at first, being very much ‘Team Boleyn’ as far as the six wives are concerned, but I was pleased to note that Jane Seymour was not portrayed as the meek angel of many a historical novel or TV drama, but every bit as calculating as her predecessor in her mission to capture the heart of Henry VIII; she was used as a tool by her ambitious family in exactly the same way.

The book is written in alternative third person POVs: that of Jane herself, and Thomas Cromwell.  I liked that the author showed the downfall of Anne Boleyn to be a fiction carefully constructed by Cromwell, who knew that Henry needed to get rid of her so he could marry another who might give him a son, but that he could not afford to have another abandoned ex-wife who refused to disappear.  Thus, a story had to be concocted to justify the murder of Anne.  I also liked the explanation of the dissolution of the monasteries; it is clear, concise, and makes for a good understanding of the whys, hows and consequences.  Janet Wertman writes factual detail in a fashion that is both easy to read and entertaining; thus, this book would be an excellent choice for someone who doesn’t know much about the era; for instance, she even explains what a monarch’s yearly Progress is.  Now and again I was a little too aware of the research being translated into the narration, but on the whole it was executed well.

The author is American and, alas, I did come across some American English in dialogue, along with historical inconsistency and modern phraseology.  Examples:

I also thought that, now and again, the dialogue between Kings, courtiers and Jane was too familiar, and doubted that Cromwell would have introduced the idea of Anne Boleyn’s treason to the King while both were in the presence of Jane Seymour.  I’m aware that writing historical fiction that takes place outside one’s own country must be an incredibly hard thing to do, and I always feel sorry for authors whose editors have let them down.  Google alone is a wonderful and easy-to-use tool.

Despite these ‘dodgy’ areas, though, I did enjoy reading it.  The writing flows, Ms Wertman tells a story in a compelling fashion, and I believed in the characters; these three factors alone are much of what this writing thing is about, after all.  With assistance from a more experienced editor (possibly an English one?) I imagine her work would get better and better.  To sum up, I would say this is light fiction for the newer reader of the genre; perhaps lovers of programmes like Showtime’s The Tudors series, or who enjoy an introduction to the period, rather than the serious history addict – avid readers of this genre are notoriously picky!

All Jane Seymour wants is a husband; but when she catches the eye of a volatile king, she is pulled deep into the Tudor court’s realm of plot and intrigue….

England. 1535. Jane Seymour is 27 years old and increasingly desperate for the marriage that will provide her a real place in the world. She gets the perfect opportunity to shine when the court visits Wolf Hall, the Seymour ancestral manor. With new poise born from this event, it seems certain that her efficiency and diligence will shine through and finally attract a suitor.

Meanwhile, King Henry VIII is 45 and increasingly desperate for a son to secure his legacy. He left his first wife, a princess of Spain, changing his country’s religion in the process, to marry Anne Boleyn — but she too has failed to deliver the promised heir. As Henry begins to fear he is cursed, Jane Seymour’s honesty and innocence conjure redemption. Thomas Cromwell, an ambitious clerk who has built a career on strategically satisfying the King’s desires, sees in Jane the perfect vehicle to calm the political unrest that threatens the country: he engineers the plot that ends with Jane becoming the King’s third wife.

Jane believes herself virtuous and her actions justified, but early miscarriages shake her confidence and hopes. How can a woman who has done nothing wrong herself deal with the guilt of how she unseated her predecessor?