Today’s team review is from Karen B, she reviews here https://sassyredheadbookreviews.wordpress.com

Karen has been reading Silent Mayhem by Sue Coletta 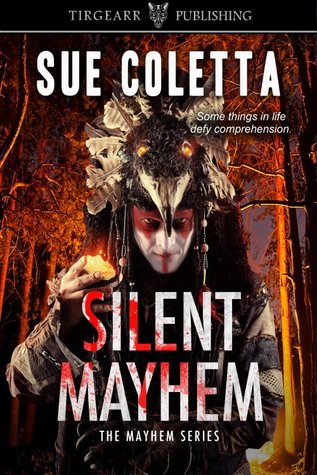 Shawnee’s back and in danger, again. Her life is about to take quite a turn with the secrets about her parents that she will try to get from Mr. Mayhem.

Mayhem, Poe, Edgar, and Allan’s lives will change in Silent Mayhem as well. Mayhem’s wife, Kimi will push the crows and Mayhem into Shawnee’s life to protect and warn her of the danger she is in. The crows may not like the fact that they need to try to protect her and warn her, but they’ll do it for Kimi and Mayhem.

Levaughn is working a case of a serial killer who decapitates and scalps his victims. There is no rhyme nor reason to the victims of the serial killer that can easily be found, and the track to the killer is not easy. Levaughn has to fight his distaste for working with FBI Special Agent Odin Barrett, when he finds out that he is working the case as well. The killer is working in two states, so the FBI are involved.

I really love reading Sue’s books. They are so full of information, sassy women, twists, and suspense that they draw me in from the first word and keep me tied up in the story until the very last page, even when that ending makes me want to scream! Sue did not disappoint with this story either. The information that was in this story for the murders and the possible reason for the killings, and the way the killer treated his victims was very interesting and I have to side with Shawnee, that the atrocities that were committed so many years ago made me just as angry as they did her. The side stories going on in Shawnee’s life are just as interesting as the main story of the murders and the murderer in Sue’s books. There is so much going on, but none of it distracts from the main story. It just gives it so much more to read and take in.

I love Shawnee and her take-no-bull attitude. Her exterior is hard, but she is secretly a kind hearted, softie. Her love for Levaughn, Maggie, and her best friend, Nadine, show her vulnerabilities as well as her softness. She is such a great character. I love her sassiness as much as her toughness that she shows.

I give this story a 5-star review and am anxiously awaiting the next book in June. I always recommend Sue’s books because they are just written so well, and they are so entertaining to read. If you are a lover of mysteries, suspense, murder, crime, or books with twists and sassy heroines you will love Sue Coletta’s books.

Some things in life defy comprehension, but that doesn’t make them any less real. Or deadly.

When a familiar crow drops a cryptic scroll at Shawnee Daniels’ feet, she’s compelled to open it, even though everything in her power warns her not to. Mr. Mayhem—the most prolific serial killer the North Shore has ever known—claims her life is in danger. He “claims” he wants to help her, but just last year he threatened to murder everyone she loves.

While Mayhem taunts her with oddly-placed feathers, like The Creator left at his crime scenes, an interstate killing spree rocks Massachusetts and New Hampshire. A madman is decapitating men and women, dumping their headless corpses on two area beaches. But what Shawnee soon uncovers shatters all she’s ever known, her memories shredded, the whispers of the past in shambles on the ground.

Can she find the strength to move forward, or will the truth destroy her?