Terry has been reading Murder Undone by Robin Storey 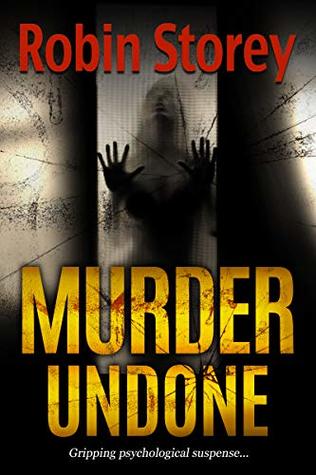 This book starts well, with main character Eva poisoning her cheating husband.  Fast forward twenty years: she’s married again, and living with the fall-out.  Except she can’t deal with it; she drinks too much, and goes into bars to pick up men for casual sex.  Then she is offered a chance to go back in time, still retaining her memories of her ‘real’ life, and not murder Cheating Charlie after all….

I found this author’s style pretty readable; I’d suddenly realise I’d galloped through 10 pages or so, without thinking about stopping to make notes, which is a good sign.  I was moderately drawn in when I first started to read, but as soon as Eva got a chance to go back in time, I thought, ah—now I’m interested!

The story continued to zip along in a readable fashion, but I did have some problems with it.  Eva’s character seemed more like a vehicle for the plot that the other way round; I never believed in her.  One minute she is the pampered, submissive wife of a millionaire businessman, the next she is daredevil sleuth, able to talk her way into any private location, and mixing with the criminal underworld without turning a hair, to the extent of having sex with them for information (and enjoying it despite the guy having had a knife to her throat, but I’m not even going to go there; the cocaine she’d taken, alone, would make her paranoid and agitated in this situation).

I was dubious about some dialogue (the way one of the female characters talks about sex would make Samantha from Sex and the City cringe) and unconvinced by some events; for instance, before she goes back in time, Eva is around 60 years old, but gets hit on/approached for casual sex every time she enters a bar to have a drink.  However glamorous and well-kept a woman of that age may be, I found this a little unlikely.

One other point is something the author might want to consider for future work of this genre.  Later in the book, Eva is caught driving under the influence of cocaine.  There was a detailed chapter about her court appearance, ending with the news report about it on TV.  Why not just cut the whole court thing, and start the chapter with the news report, ending with a paragraph or two about how she felt, watching it broadcast to the world?  That would have given all the information the reader needed, and let them get on with the more juicy stuff, like infidelity, deteriorating marriage and underworld dealings …

… because it is a rip-roaring tale, and not badly put together at all, generally.  The basic idea is great, though I didn’t feel enough use was made of the fact that she was living her life over again; I expected more references to the past, and perhaps the steering of other events, too.  It’s a bit like a watered-down Jackie Collins (that’s a compliment, by the way!), but, alas, I need to be convinced by and become totally involved with the characters in order to really enjoy a book, and Eva never came alive to me.

To sum up: the author has much of the skill and writing style for this genre, but it still needs a bit of fine tuning!

Wealthy socialite Eva Dennehy murdered her first husband Charlie because he was planning to leave her for his mistress. Even her marriage to kind-hearted Edgar can’t blot out her remorse or fill the gap Charlie has left in her life.

When Eva is offered the opportunity to travel back in time and undo her crime as penance, she accepts – what does she have to lose? Back in her old life with Charlie, her passion for him surpassed only by her torment at his infidelity, she is more determined than ever to prevent him from leaving her.

But Eva discovers a sinister side to Charlie she never knew before, and her plan plunges her into a world of crime and depravity. She soon realizes she has even more to lose this time around.

If you love complex, flawed characters, simmering tension and suspense with a twist of noir, you’ll love Robin Storey’s novel of jealousy and betrayal.

Scroll up and click the Buy Button now to immerse yourself in this story of the dark side of love.

Homemade Apple & Honey Oat Crumble! 🍏🍯
Very pleased to be given a pot of @manukadirect honey by my aunt yesterday. Pictured here with one of @the_indigo_cottage_company bees 🐝 #honey #manukahoney #lovehoney #lovebees🐝
An immortal magician is hired to capture a dangerous inventor. Set in 1865, this story begins in San Francisco and ends in Prague.
Recently I have been chatting with fellow garden enthusiasts about planting seeds. Here are my bell pepper 🫑 plants 🪴 grown from the seed of a shop bought fruit. This photo is especially for @sarahbrentyn whom I’m sure will be experimenting with a variety of seeds herself shortly. If I have inspired you or any other readers, then I am very happy 😃 #growyourownfood #growyourownveggies #growyourownpeppers #growyourownproduce #bellpeppers
'Someone Stole A Dead Body'. A new case for Stride and Cully.
The Key To Life Is Happiness!
The lesser known sequel to War Horse. Rosie's #Bookreview of Farm Boy by Michael Morpurgo
If life gives you lemons…A while ago I decided to try and grow a lemon 🍋 from seed. I rinsed off the slime from the pips, then popped them in my mouth to get rid of any residue from the lemon flesh. Then put the seed into a pot of gritty mix compost. I now have 5 baby lemon plants. They may only become indoor greenery as these were grown from commercial fruits, but I shall look forward to see what they do.
Her Heart For A Compass by @sarahferguson15 @marguerite_kaye @millsandboonuk @harpercollins @williammorrowbooks