Terry has been reading The Wire Recorder by Thomas A Levitt 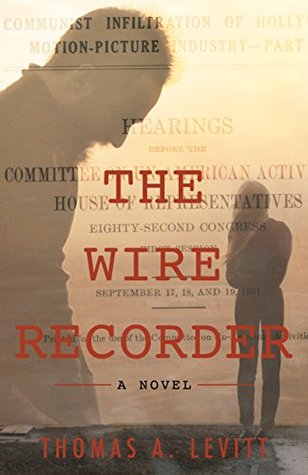 I was attracted to this book because of the great title, the great cover, and the blurb that spoke of the 1951 campaign to root out communists in the US film industry, something that interests me greatly.  Mr Levitt writes well, and the book flowed along nicely.  I did like much of it, hence the 4 stars, although it was not the book I expected.

The anti-communist witch-hunt is dealt with in a brief fashion in the first ten per cent, after which the novel is about the life of Sophie Hearn, the daughter of Larry, who suffered under the HUAC (House Un-American Activities Committee) campaign.  Running alongside Sophie’s story is that of Steve, whose parents were also involved; I found his early development one of the most compelling parts of the book, especially as it took place in a time when developmental disorders went unrecognised.

Mr Levitt creates the atmosphere of 1960s California so well, I would imagine from personal experience, and many of the incidental characters come alive immediately, particularly in their dialogue.

The reason I didn’t enjoy the book quite as much as I had hoped is that there was not much actual plot; it is more of a biographical account of Sophie’s life, with chapters dedicated to the social issues of the time.  Throughout, I kept waiting for some real conflict, or suspense; opportunities for drama were missed, with any problems (one character’s excessive use of marijuana, and, later, the logistics of a mixed race marriage) being resolved quickly and easily, within a page or two, almost as if the author had a checklist of issues to be mentioned.

I enjoyed reading Steve and Sophie’s experience at their student parties (and the ridiculous dialogue of the hippie idealists was extremely well done), but few of the scenarios tied together, events happening in isolation.  I wonder if there was perhaps too much material for one book; the author has dealt with not only the HUAC campaign, but also the newly permissive 1960s, sexism, drugs, the women’s lib movement, living in a commune, new teaching methods, racism, the difficulties of mixed race marriages, employment problems—all this is crammed into one medium-length novel, whereas any one of those subjects would make a great basis for a story all on its own.  This is a debut novel, and I know it can be a temptation to play all your cards straight away!

The bulk of the book is about Sophie running an experimental school, and her subsequent difficulties in finding a post in a ‘public’ school.  Sadly, I never got a sense of who Sophie was, though Steve was a rounded, three-dimensional character.

What kept me turning the pages was the writing style, which is extremely readable, the entertaining snapshots of particular aspects of the era, the fact that the author clearly knew his subject matter so well, and the excellent dialogue in the portraits of incidental characters.  In the last fifteen per cent, too, there is more of a coming together of Sophie and Steve’s lives, a little more suspense, and an explanation of why and how they were affected by what happened to their parents at the beginning of the book.

To sum up: as a fictional account of the sociological history of the era, this is a most fascinating book; for those who are looking for a plot-driven novel about the HUAC campaign and its affects, though, not so much.

Sophie Hearn grows up hearing about the House Un-American Activities Committee’s 1951 campaign to root out Communists in the film industry. Her father’s impassioned testimony in defense of the First Amendment—and his refusal to answer questions about his political associations—leave him blacklisted for years, destroying his promising screenwriting career and putting his family on the edge of financial ruin. Unsurprisingly, his daughter becomes politically aware at an early age.

The shadow of the blacklist follows Sophie to college and then into adulthood, affecting her politics, her career ambitions and her relationships. But it’s not until she reunites with Steve Elwood, a long-lost childhood friend, that she’s forced to face the full impact of her family’s past.

A powerful story about coming of age in California in the mid-twentieth century, The Wire Recorder explores how political paranoia, when allowed to spiral out of control, can leave a toxic residue that lasts for generations.