Cathy has been reading In Her Defence by Jan Edwards 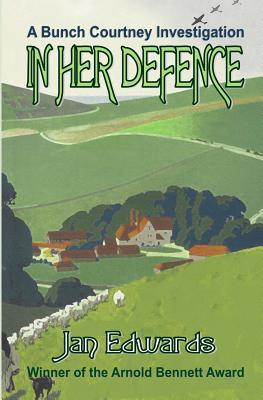 In Her Defence is set in Sussex in 1940 as the German army advances through Europe. Bunch (Rose) Courtney’s home, Perringham House, has been requisitioned by the MoD and Bunch is living with her grandmother in the Dower House while running the family estate.

Bunch had made her purchase of two Jersey heifers at auction on a busy market day. She and her recently widowed sister, Dodo (Daphne) were lunching at the local pub, along with Dodo’s father-in-law. Bunch noticed that a young woman sat alone at the bar, looking unwell, was attracting attention from the other patrons. Suddenly the woman fell to the floor writhing in agony. Panic broke out and Bunch, who is a trained nurse, tried to help but to no avail.

Several days later Bunch received a letter from an old school friend, Cecile Benoir, asking to meet her in the village. Cecile and her father left Berlin via France for England due to the war and now, after his untimely death, she is in need of a job and somewhere to live.

Two suspected poisonings so close together are too much of a coincidence for Bunch. Although this is the second book in the series (I haven’t read Winter Downs, the first) there are enough back references to get a sense of the characters and know that Bunch and Chief Inspector William Wright are meeting again in less than auspicious circumstances. I get the feeling each of them would like to take their acquaintance a little further—but perhaps are held back because of the political and economic climate.

The story is told from Bunch’s perspective and it’s clear her view of the world is limited and sometimes tested due to her gender and social position. Jan Edwards conveys the time and place and the atmosphere of the war years very well. The characters are realistic, doing the best they can under the circumstances with the inclusion of rationing, land girls and the military presence. Not to mention the negative attitude towards anyone seen as a foreigner. The uncertainty and difficulty in adjusting to the changes in their way of life has affected everyone.

Bunch is a resourceful, likeable and unconventional protagonist, kind but very well able to stand her ground, and determined to find out whatever information she can regarding the deaths.