Olga has been reading A Plague Of Pages by John F. Leonard 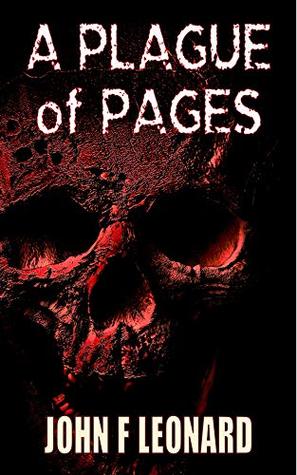 If you love the Friday the 13th series, The Conjuring, The Twilight Zone, and Alfred Hitchcock Presents, you’re likely to enjoy this. But, this is horror, and this story, goes into fairly gore detail.

I won’t spend too long rehashing the plot of the story. Anthony is a man who’s lost everything (well, not quite everything, as it turns out), and decides to try his hand at writing. Well, we’ve all been there (not perhaps having lost everything, but thinking about becoming a writer). That he decides to go old school and use pen and paper is more surprising, but his father dealt in antiques and he has an interesting heirloom to put to good use. Or bad. Of course, things take a turn for the weird soon enough.

The story is told in the third person, mostly from Anthony’s point of view, although, interspersed in the novella are some chapters that follow the investigation into a very strange streak of crimes. In fact, the book starts with one of the most bizarre crime scenes I’ve come across (and yes, I read a lot of thrillers, so that’s saying something). A word of warning: if you are of a sensitive nature, especially when it comes to libraries and librarians, you should look away. But don’t worry. I won’t describe it. Those chapters of the story, told from the point of view of Detective Sergeant Shadwell, Adi, read like a standard thriller, with the case-worn detective, the less than politically-correct policeman, the uninterested boss, and will probably feel familiar to those who read in that genre. Adi is a likeable character and shows a good deal of patience and resilience, but we don’t get to know him too well. This is a novella, after all, and most of it is taken up by Anthony’s events. You’ll probably suspect that the two seemingly separate parts of the story are interconnected in some way or other, even though the first chapter is set up “After the Handfield Tragedy” (yes, foreshadowing or what?) , and then we go back several months to get to the main action of the book. After that opening, we take up the story of Anthony, which starts innocuously enough, like many other stories you might have read about people who’ve lost everything and quickly fall into a hole, unable to find a way of slowing their downward spiral. But there is the pen, and strange things start happening quickly.

Although the story and the cards he has been dealt might make Anthony sound sympathetic, and he experiences things that would have made anybody feel unhinged, this feeling, at least for me, did not last long. Yes, he protested and claimed to be shocked for what he might have unwittingly caused, but it soon became evident that he showed no true empathy for anybody he met, and he was more preoccupied for himself and his own safety than for that of others. He seems to always think in clichés, platitudes, popular and old sayings, and proverbs, as if he did not have a single original thought in his head, and when we hear from his father, it seems that this is a family trait. As was the case in the previous story, it seems that the objects belonging to the Dead Boxes choose their owners well, indeed, and seem able to dig deep into the characters’ psyche and uncover less than flattering characteristics.

I enjoyed the story, although as was the case with the previous one, I wouldn’t recommend it to people who don’t enjoy horror or graphic violence. It is not a story likely to make you jump, but it builds up pace, and the events get more horrific as you read on (well, after the shocking start). The interim chapters from the point of view of the investigator (also written in the third person) give the reader a bit of a break, a touch of normalcy, although due to the nature of the crimes, this is relative.

I felt this novella is more likely to satisfy readers who like a sense of closure and explanation than Call Drops. We get more information about the item itself, and there are hints at the full mythos behind the Dead Boxes, which grabbed my attention.  And the ending… Well, readers have known from the beginning that something big was coming, but not necessarily what. Yes, it worked for me.

Because this is a short novella, I don’t want to share too many quotes from it because it would make it difficult not to give away too many spoilers, but I thought I’d close with this short one, which for me encapsulates a warning we should all pay attention to:

There was always a cost. That was how everything worked. Supernatural or humdrum day to day. It was all the same. You could get some goodies so long as you were willing to pay.

Yellow orange flowers 💐 not quite sure of their name. Anyone have a suggestion? #yellowflowers #orangeflowers #gardenflowers #urbangarden #countrygarden #hampshiregarden #lovegardens
Drag, Songs, Friends, Laughs, Lies, Danger & Redemption - a story set in a gay bar in Magawatta, Indiana.
'A biography of the life and works of the man who created Middle Earth.'
New Tasty Good Reads! Books and Cheese from Fromage and Fiction in conjunction with Cheese Cuisine. @cheesecuisine @fromageandfiction
'A close-knit group of friends set off on a hike in the remote, mountainous Tsitsikamma region of South Africa. Three couples, one father and his daughter. From the beginning there are problems; one person falls ill, and another takes no notice of the rangers' weather warnings, leaving them stranded in various locations.'
When you are on day 12 of isolation because you have two family cases overlapping, surprise flowers from a friend mean the world! #surprisedelivery #friendship #friendsmeaneverything
A little treat for myself. Bought from https://moteefe.com/store/garden-lovers
#NewRelease Historical fiction set in a small coastal village near St. Ives in Cornwall.
First two chilli peppers 🌶 grown from seed. I have never tried growing these before. #growyourownveggies #growyourownfood #chilliplant #homegrownveggies #homegrownfood #homegrownproduce