Today’s team review is from Karen, she blogs here https://mytrainofthoughtson.wordpress.com

Karen has been reading Voyage Of The Lanterfish by C.S. Boyack 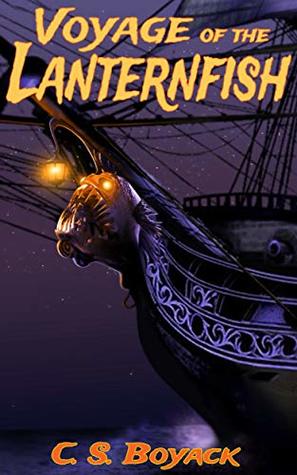 This book introduces you to a man with a mission – to rescue his fiancée.

With “Voyage of the Lanternfish”, C. S. Boyack presents us with an entertaining and sometimes pretty funny historical fantasy story. The story is skillfully elaborated and has a great flow. Ernest Hemingway once stated “When writing a novel a writer should create living people; people not characters. A character is a caricature.” C. S. Boyack shows this masterly with this story – he created living people (and some amazing creatures) instead of mere characters; even if the monsters are not human – they all have a personality. I was drawn into the story right away, very close to James, Dan, and their mission. The protagonists’ personalities are complex, the others of sufficient depth according to their relevance. Protagonists who grow with their tasks during their mission will take you on an unforgettable journey. I could easily envision the characters and locations. Indeed, C. S. Boyack has done it again: I had a wonderful time reading “Voyage of the Lanternfish”; it is a highly entertaining read.

This is for you if you like great story-telling, ‘historical’ fantasy stories, interesting personalities to cheer on, as well as thought-provoking, and fun moments.

This is a book to read again. Highly recommended!