Cathy has been reading Brandon by Tony Riches. 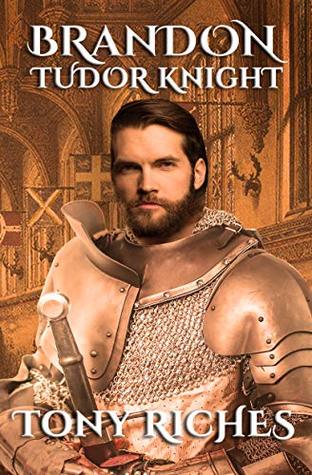 We first meet Charles Brandon as a twenty-one year old, newly appointed to the King’s Spears. His father, who was Henry Tudor’s standard bearer, died during the Battle of Bosworth, and Brandon had been brought up at the court of Henry Vll. He became good friends with the young Prince Harry, who was later crowned Henry VIII, teaching him to joust and was one of his favoured group of courtiers.

Always finding himself lacking funds, Brandon incurred huge debts from borrowing money, primarily from Thomas Wolsey and afterwards Thomas Cromwell. His first marriage was a means to an end—Lady Margaret Mortimer had wealth and much land.

I knew next to nothing about Charles Brandon, really only that he married Mary Tudor. It was interesting to follow his story and the research was obviously detailed. Brandon worked his way up the ranks until he became Duke of Suffolk. He and Mary took a huge risk by getting married before asking Henry’s consent, especially after Brandon had been warned not to unleash his charm upon Mary. Henry had someone in mind for his sister for political reasons. Incurring his wrath was a dangerous thing and could be classed as treason. As it was, Henry made his displeasure felt by excluding them from court and keeping his distance for a while.

Mary’s unwavering and public support of Queen Catherine of Aragon caused friction between Brandon and the Boleyn family, whose fortunes were on the rise, not to mention Henry’s new chief advisor, Thomas Cromwell. Brandon had to keep in mind his responsibilities to his family as well as loyalty to Henry when it became obvious Ann Boleyn would be the next queen.

The story centres around Brandon and I enjoyed the way Tony Riches incorporates details of life at court with all its intrigue and danger into the narrative. Brandon is a well fleshed out character who managed to navigate his way through the unpredictability of court politics. He led a full life and was lucky enough to marry twice for love.

Handsome, charismatic and a champion jouster, Sir Charles Brandon is the epitome of a Tudor Knight. A favourite of King Henry VIII, Brandon has a secret. He has fallen in love with Henry’s sister, Mary Tudor, the beautiful widowed Queen of France, and risks everything to marry her without the King’s consent.

Torn between duty to his family and loyalty to the king, Brandon faces an impossible decision: can he accept Anne Boleyn as his new queen?