Olga has been reading Justice Gone by N. Lombardi Jr. 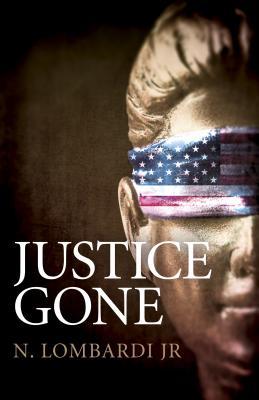 This is not an easy book to categorise, and it could fit into a number of classifications, but it goes beyond the standard examples many of the readers of some of those genres are used to come across. When I heard about this book, my interest was piqued by several elements: the book features as one of its main characters a female therapist who has specialised in counselling war vets (many of them suffering from PTSD), and as a psychiatrist (and I did work with military personnel, although not from the US) I’m always intrigued by the literary portrayals of psychologists and psychiatrists and of mental health difficulties. There is a mystery/thriller element, and because I’m an eager reader (and writer) of those genres, I’m always keen to explore new authors and approaches. The novel also promised a close look at the US judicial system, and having studied criminology and the British Criminal Justice system, that aspect of the book was also intriguing. Could the novel deliver in so many levels?

Dr. Tessa Thorpe is an interesting character, and it seems that the author is planning to develop a series of novels around her. She is described as insightful and compassionate, with strong beliefs (anti-war), morals, and a trauma of her own. She is not the perfect professional, and at times her trauma affects her behaviour to a point that I thought would have got her into trouble if she were working in a different environment. We are not given full details of what has happened to her before, but the hints we get through the novel (where other characters in possession of that information refer to it) give us a fair idea. She is much better at dealing with others and understanding what moves them to act as they do than she is at dealing with her own issues, but that is a fairly realistic aspect of the book (although considering how insistent she is in getting others to talk about their difficulties, it is surprising none of the colleagues take her to task). What I was not totally convinced about was the fact that at some point she decides to support the vet going to trial accused of murder, and she leaves her practice and patients unattended for weeks. As she works in a private clinic and we only meet one of her patients, we don’t have sufficient information of her day-to-day tasks, and it’s quite possible that this is not a problem, but it felt counterintuitive to me. Tessa plays an central part in the plot in more ways than one, because although she is an expert in some aspects, she is totally new to what happens in other parts of the novel, like court procedures, and at those points she works as a stand-in for the readers, asking for clarifications and being walked through the process in detail.

The mystery and thriller elements, as I said, are dealt with differently to in many other books. The novel starts at an earlier point than many of the books that give advice to writers would recommend. It does not start in the middle of the action, or the crime (what the real crime is here is one of the main questions). We get the background to the events, down to the phone call to the police about a homeless man, which gets the ball rolling at the very beginning of the book. The police, who have been fed the wrong information, end up beating the man, a war-vet, to death. This causes a huge uproar, and we hear about the way the authorities try to sweep it all under the carpet, then the apparent revenge killing of the three policemen, the chase of a suspect, the hair-raising moment when he gives himself up (with some help from the doctor and others), and then we move onto the court case. There are moments where the book leans towards the police procedural, and we get plenty of details about the physical evidence, the investigation and those involved, we witness interrogations, we are privileged to information even the police don’t have, we get red herrings, and dead ends. The ending… there is a twist at the end, and although some might suspect it is coming, I was so involved in the court case at that point that I had almost forgotten that we did not know who the guilty party was.

I think this is one of the books I’ve read in recent times that best manages to bring to life a US court case, without sparing too many details and at the same time making it gripping. I will confess that the defense attorney, Nathaniel Bodine, is my favourite character, one of those lawyers who will happily cross the line for their client, and he seems, at times, a much better psychologist (and manipulator) than the doctor is. The judicial process is realistically reflected and at times it reads as if it were a detailed film or TV script, with good directions and fantastic dialogue.

And, we also follow the deliberations of the jury, in a few chapters that made me think of Twelve Angry Men, a play I remember watching many years back, although in this case we have a more diverse jury (not twelve men and not all Caucasian) and a more complex case. I thoroughly enjoyed this part of the novel as well, and I could clearly see the interaction between the sequestered jury in my mind’s eye. (It would make a great film or series, as I have already suggested).

The story is told in the third person by an omniscient narrator that at times shows us the events from the point of view of one of the characters, mostly from Tessa’s perspective, but at times from others, like her co-workers or members of the police force. At some points, the story is told from an external and fairly objective perspective (like the jury deliberations); although at times we glimpse the personal opinions of that unknown narrator. I know readers dislike “head-hopping”, but I was never in any doubt about whose point of view I was reading, and the alternating perspective helped get a more rounded view of events and characters. Although the style of writing is factual and to the point (some of the descriptions reminded me of police reports, in their matter-of-factness), that does not mean the book fails to produce an emotional reaction on the reader. Quite the opposite. Rather than emphasising the drama by using over-the-top prose, the author lets the facts and the characters’ actions talk for themselves, and that is much more effective, in my opinion.

I recommend this book to anybody who enjoys a mystery/thriller/police procedural novel which does not obey by the rules and is keen to engage readers in controversy and debates that go beyond a standard genre novel. (The author explains he was inspired to write this book by an incident not dissimilar to the death of the veteran at the hands of the cops at the beginning of the novel). The novel goes into more detail than most readers keen on those genres will be used to, and also follows the events from the very beginning to the very end. This is not a novel only interested in thrilling readers by highlighting the action scenes and ignoring the rest. Readers who always feel there are aspects of a story missing or underdeveloped will love this book, and also those who like complex characters (plenty of grey areas here) and a story that lives beyond the page. I also see book clubs enjoying a great discussion after reading this book, as there is much to debate and ponder. An accomplished novel and the first of a series that we should keep a close eye on.

When a homeless war veteran is beaten to death by the police, stormy protests ensue, engulfing a small New Jersey town. Soon after, three cops are gunned down. A multi-state manhunt is underway for a cop killer on the loose. And Dr. Tessa Thorpe, a veteran’s counselor, is caught up in the chase. Donald Darfield, an African-American Iraqi war vet, war-time buddy of the beaten man, and one of Tessa’s patients, is holed up in a mountain cabin. Tessa, acting on instinct, sets off to find him, but the swarm of law enforcement officers get there first, leading to Darfield’s dramatic capture. Now, the only people separating him from the lethal needle of state justice are Tessa and ageing blind lawyer, Nathaniel Bodine. Can they untangle the web tightening around Darfield in time, when the press and the justice system are baying for revenge? Justice Gone is the first in a series of psychological thrillers involving Dr Tessa Thorpe, wrapped in the divisive issues of modern American society including police brutality and disenfranchised returning war veterans. N Lombardi Jr. is the author of compelling and heartfelt novel The Plain of Jars.