Cathy has been reading Picture Not Perfect by D.E. Haggerty 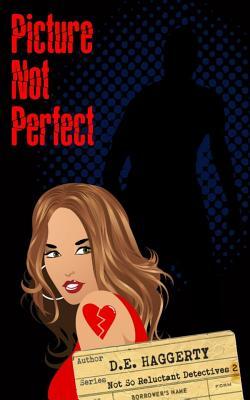 In Picture Not Perfect we are reacquainted Terri, school librarian, and Melanie, school guidance counselor. Melanie’s ex, Owen, is trying his best to rekindle their relationship but Melanie is reluctant. Her over abundance of energy and lack of consideration for others is down to her ADHD and make her a complex and sometimes irritating character. She is aware not many people can cope with her hyper personality and recklessness. Afraid of Owen’s reaction to her diagnosis, she prefers to keep him at arm’s length rather than be let down.

When creepy Alfred Schultz, a social sciences teacher at the school, is found dead, Melanie is in the frame for his murder. The police found photos of her at Schultz’s house and believe he’s been stalking her.

“But he wanted to know you. Was he stalking you?” Davis’ harsh tone was in direct contradiction with Meyer’s gentle enquiries.

[Quote] “Stalking me! If he were stalking me, you’d know about it because I would have filed a police report. Duh. I’m a guidance counselor. I know exactly what steps I need to take when I’m being harassed, which I wasn’t.” By the time she finished her tirade, she was nearly screaming. [Quote]

Melanie is determined to find the real murderer in order to get the police off her back, and draws Terri and new English literature teacher Pru, into her far fetched, madcap, and sometimes dangerous, schemes as she follows up on her suspicions and speculations. The friends manage to uncover more than they’d imagined but will the police believe them?

Being Melanie’s friend would tax many people but Terri especially, and Pru, take her at face value. Terri is used to her antics and Pru is learning fast. Owen’s doing his best to convince Melanie he’s in it for the long haul, but she’s not easy to convince. There’s a good mix of characters and I enjoyed the chapter headings.

Picture Not Perfect is a light, fun cosy mystery, perfect for whiling away an hour or two.

A picture tells a story. But is it the truth?When the police find pictures of Melanie hanging up at her murdered colleague’s house, they’re convinced he was stalking her. Maybe she even killed him. Melanie was not being stalked! And she certainly didn’t kill her supposed stalker – as if. But Mel – always up for a bit of drama – jumps at the chance to go search for the real killer. When Mel’s ex-boyfriend, Owen, discovers her plans, he pulls out all the stops to ensure she’s safe and to win her back. No matter what happens with the murder investigation, he’s not letting her go. With the police setting their sights on Mel, he may need to jeopardize his own career on the police force to protect her. Will Mel find the real killer before the detectives arrest her for murder?