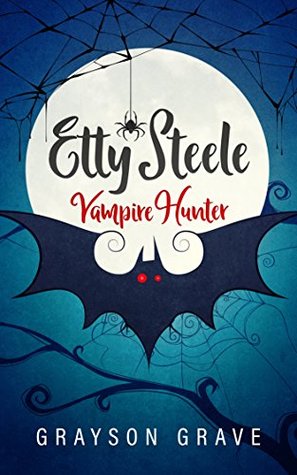 Etty Steele Vampire Hunter is a simple, easy-to-read fantasy for middle grade children. It’s got an easily recognizable moral that it is relating. The main character is not perfect. The relationship between the parents is atypical. (Oddly enough, both parents are even present in the book for a while!)

Probably the most interesting thing about Etty Steele Vampire Hunter is that Etty has trouble reading. It never goes in depth as to precisely what her problem is, but it’s obvious that she struggles. It’s equally obvious that her parents (well, one of them, really) don’t see it as nearly the problem that it is. This bothered me. Problems with reading are frequently overlooked (though not for the same reasons as in this book) and they never should be. As a parent, the idea of not getting my child the help she needs makes me twitch. As a life-long bookworm, my heart hurts for Etty and what she’s missing out by not being able to read well.

I think it’s great that the author is representing children that have trouble reading. It just makes me sad to think that there are kids out there like Etty who don’t get the help that they need because ‘reading isn’t that important’.

Another thing that keeps it interesting (as an adult) is that Etty is not what grownups would term a ‘good’ kid. We are told early on in the story that she was the type of kid who frequently got into fights. Her behavior stems from her relationships and examples set at home. Again, even though the reasons themselves are different, the fact is there are kids like Etty everywhere, and it just makes me want to strangle parents who don’t actually parent their children. Hopefully the kids who read this that are like Etty can recognize that they have more worth than what they’re taught, and think outside the box their parents have trapped them in.

However, Etty Steele Vampire Hunter was not a satisfying read. The conclusion felt like it was lacking oomph. Instead the way it ends the story sort of fizzles out without any real feeling of resolution. Technically the arc ends, but it just feels weaker than it should have. This takes a lot of the power of the story away from it.

Overall, not a bad book. Just not a great one.

Etty Steele is a vampire hunter. There’s only one problem – she doesn’t have her hunter powers. No super-strength, no super-speed. Nothing.

When she goes back to school after the summer, she’s surprised to find a new boy has joined her class. Even more surprising – he’s a vampire!

If only there was a way to stake him through the heart without anyone noticing.