Barb has been reading Blue Lake Christmas by Cynthia Harrison 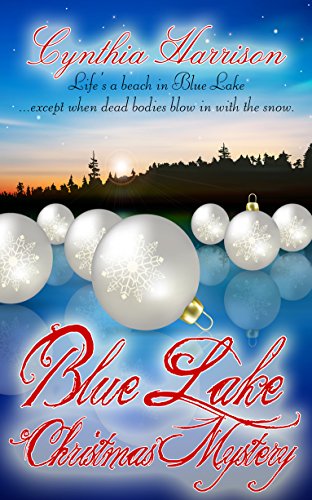 In the 1930s, the biggest names in British detective stories formed the British Detection Club. They took an oath—

“Do you promise that your detectives shall well and truly detect the crimes presented to them using those wits which it may please you to bestow upon them and not placing reliance on nor making use of Divine Revelation, Feminine Intuition, Mumbo Jumbo, Jiggery-Pokery, Coincidence, or Act of God? —Oath of the British Detection Club, 1930”.

…which most promptly violated to some degree. But author Cynthia Harrison would be a member in very good standing. Her new cozy mystery, Blue Lake Christmas Mystery, could be a laundry list for the genre’s main tropes—even if there are no little old ladies who like to knit, cats, or even cupcakes.

The action is set in Blue Lake, a tiny town on Michigan’s Lake Huron coast, where everyone (including Holly) is either related or part of generations of family friendships. When we meet the ambitious, painfully young Holly, she’s focussed on using her new role of junior (and only) reporter for the struggling local paper as a springboard to credibility for her secret project—a book revealing an inside look at a recent local tragedy involving her young cousin.Her sleuth, newly-minted college grad and writer wannabe Holly is an amateur journalist and even more amateur detective. She sees investigating a recent Blue Lake scandal as her ticket to fame and fortune. When another murder occurs, she doesn’t hesitate to apply her newly acquired journalist credentials to her self-appointed detective role.

As Holly gets to know the people in the town, however, she begins to understand the trauma that exposing their pain and ongoing suffering for her own gain would cause for relatives and friends still struggling to recover. At the same time as she finds herself falling for the emotionally devastated young architect Bob, Holly is also applying her loose-cannon investigative skills to the latest murder, a much-disliked guest at the holiday dinner for the local Fun Divorce Club.

Also in keeping with the cozy genre, bodies pile up offstage, but actual blood/bodily fluids are kept to a minimum. Same goes for sex, actually. Holly’s on-again/off-again romance with Bob is indeed cozy, with misunderstandings, emotional baggage, and ever-present relatives combining to stall developments and physical demonstrations.

I enjoyed so many aspects of this book. Although there wasn’t much actual description of the town and surroundings, I’ve spent enough time in Michigan to be able to picture the setting. And I loved the authentic sounding interactions between the residents of Blue Lake, with their combination of humor and family snark that hinted at years or even generations of background.

Holly’s is also an interesting voice. She’s funny, immature, ambitious, and clever. “She may have overwhelmed Bob with her comments, because he went silent again. Holly briefly wondered if she should have gone to dental school. Conducting this interview was like pulling teeth.” But over the course of the book Holly learns and even grows into a mature understanding of her ambitions and her responsibilities.

Sure there were things that made me sit up and shake my head. There was the mysterious book agent who was supposedly offering a lucrative contract to the young, unpublished, and untried author who hadn’t even researched, let alone written, the book. (I’d love to live in that writing universe!) Then there were the members of the police and medical profession who apparently couldn’t wait to gift just-met reporter Holly with all manner of detail that must have violated every iota of regulation and ethics. And, of course, there’s Holly’s unexplained but apparently deep pockets which allow her to shrug off details about paychecks, and even on short notice “to buy a dress for the ball with a matching burgundy velvet coat.”

At first, the numerous coincidences and leaps of faith, instances of journalistic license, and unprofessional secret-sharing bothered me. But then I thought of the small towns I’ve lived in, their gossipy local papers, and the way everybody knows everything as soon as it happens, and I realized these are actually strengths of the book. So really, my only complaint is that Blue Lake Christmas reads like a middle book in a series, with people and events that were introduced and explained in earlier works.

I’d recommend this to anyone who enjoys a quick-moving cozy mystery where you’ll figure out the murderer long before the amateur detective but have a great time along the way. It’s a fun winter read, so grab a cozy quilt and snuggle up next to the fire.

All Holly wants for Christmas is to prove to her parents that her pricey college education was worth it. When she lands a reporting job in tiny Blue Lake, where the chill winds blow off Lake Huron all winter long, and a guest dies at a dinner party, she isn’t sure she can meet that goal. Holly has a second writing gig as a true crime reporter in mind, but there’s only one problem: the new love interest keeping her warm is determined she should not write about the one thing her heart desires.

Bob has one goal: to get his life back on track after a train wreck of a relationship with a fragile first love named Lily. Oh, it would also be nice to feel excited about work again. Not to mention Christmas. Holly’s new in town and she stirs something cheerfully seasonal in him, but when he realizes she’s willing to take down Lily for her own purposes, he decides a holiday romance is the last thing he needs.

Rebel’s Revenge by Scott Mariani is book #18 of the Ben Hope Action Adventure series. This one is set in Louisiana and has links to Voodoo and The American Civil War. . See here for full review https://wp.me/p2Eu3u-fjJ . #Gifted #AmazonVine #ScottMariani #BenHope #ActionAdventureBooks #BooksInTheBenHopeSeries #Voodoo #AmericanCivilWarBooks #BooksSetInLouisiana #Louisana #BookReview #BookReviewer #throsieamber #Instabook #Instadaily
If you like a well-told classic short story with dark humor and even darker magic, if you enjoy an inside look at a skill set whose whole purpose is to fool the eye, and if you see the looming iceberg but you still enjoy the view from the deck chairs on the Titanic, then I recommend Dark Magic. See here for full review https://wp.me/p2Eu3u-fhB . Barb reviews paranormal novella Dark Magic by Tom Williams for Rosie’s #Bookreview Team #RBRT . #Gifted #Magicians #BooksThatFeatureMagic #BooksThatFeatureMagicians #therosieamber #booksthatfeatureconjurors #MagicShows #InstaBook #InstaBookreview #InstaDaily #Novella
Victorian #Romance The Winter Companion by Mimi Matthews is reviewed by Liz for Rosie’s #Bookreview Team #RBRT . Mimi Matthews is, in my opinion, quite the best author of historical romance writing today. The stories in the Parish Orphans of Devon, complement each other in the way that the friendship of the four young men also does. Each has noble qualities and failings, with which their new partners will support them. At first Neville Cross might seem a less dynamic hero than his former friends but his strong physique and gentle relationship with horses make him very attractive. In contrast our heroine, Clara, seems confident and highly intelligent. But each have problems to deal with. After a traumatic accident, Neville struggles with communication while Clara must earn a living to support her brother at university. . See here for full review https://wp.me/p2Eu3u-fho . #VictorianRomance #ParishOrphansSeries #BooksSetInDevon #BooksThatFeatureDevon #DevonLife #InstaDaily #InstaBook #therosieamber #Gifted
STARGATE SG-1: Behind Enemy Lines by Sally Malcolm @sally.malcolm 4.5 stars STARGATE SG-1: Behind Enemy Lines (SG1-31) is a fanfiction story which follows ten years after STARGATE SG-1: Fragile Balance. That was the television episode where a teenage boy claimed to be Jack O'Neill. It turned out that he was a clone made by the Asgard, but the teenage Jack was allowed to stay on Earth. He had all of Jack’s memories and experiences, but they were now inside a younger version. In Back Behind Enemy Lines, a restless young Jack discovers that SG1 needs his help once more. See here for full review https://wp.me/p2Eu3u-fiB #FanFiction #Stargate #StargateSG1 #SciFiBooks #StargateFanFiction #StargateBooks #BooksInTheStargateSeries #StargateFan #StargateForever #StargateCommand #StargateLover #StargateForever #StargateFandom #StargateSG1Forever #Bookreview #SciFiBookReview #SciFiWorld #SciFiDaily #SciFiNovel #FanFic #FanFictionStories #TuesdayBookBlog #BookBlogger #Bookreviewer #Reviewer #Instabook #InstaDaily
I was lucky enough to receive a @kitchencraft World of Flavours Stir Fry Gift Set recently to review. Here is what I thought of it; The set includes a 30cm non-stick wok, two pairs of chopsticks, two 200ml ceramic dip bowls, 30g jar of Chinese five spice and 50ml bottle of soy sauce. The wok is solid and sturdy and a nice weight, but not too heavy weighing in at 864grams. It is generous in size and can hold a lot of ingredients (I used it to cook for a family of three quite easily). It has a great non-stick surface and heats up very quickly. It can be used on all types of hob including an induction hob which are not suitable for most woks. Not only is it good to cook in, it washes up like new (handwash only). The wok comes with a 10 year guarantee (3 years for non-stick). The two ceramic dipping bowls are very pretty , a nice size (10cm diameter) and are dishwasher proof. We enjoyed the flavour of the Chinese five spice. With #Amazon, at £26.95 at the time of writing this product offers value for money and would make the ideal gift for any couple moving in together, a #student going off to #university or anyone who enjoys cooking. #gifted #amazon #amazonvine #amazonreviewer #kitchencraft #cooking #wok #food #therosieamber #bookreviewer #reviewer
Liz reviews cosy #Mystery Death By Baguette, for Rosie’s #Bookreview team #RBRT Death by Baguette is the second murder mystery involving quick-witted Lana Hansen. A helpful, efficient tour-guide, she takes small groups of wealthy American tourists on organised visits to popular destination. This is also Lana’s first visit to Paris, but she is well prepared and nothing phases her, except discovering her new boyfriend, Chad, is one of the guests and he’s married! Visiting Paris, the city of love, in time for Valentine’s Day sounds idyllic for the couples she accompanies but most of them have relationship problems, including Lana’s friend Willow and her partner Jane. Luckily Lana’s new assistant Randy Wright is very helpful, if rather nervous. See here for full review https://wp.me/p2Eu3u-fhf @jsaauthor #Gifted #Bookreview #CosyMystery #Murdermystery #BookOfTheDay #Instaread #instabook #Instadaily #BookssetinParis #Paris #Booksofinstagram #BookCommunity #TravelCanBeMurder