E.L. Lindley has been reading Evo by Diane May 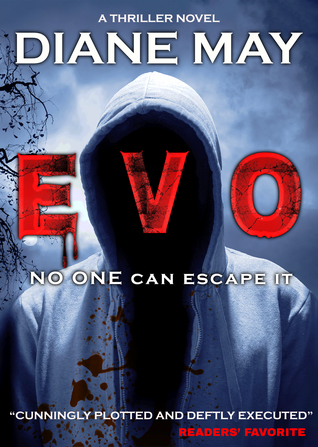 Evo by Diane May is an exciting crime thriller that kept my interest from beginning to end. With an international setting and hints of sci-fi it has the potential to appeal to a very wide audience.

The novel centres around a covert CIA operation that involves genetic engineering. The unchecked sense of power this elicits sees one of the doctors become a potential biological terrorist and raises the question of whether anyone should be allowed to play God. May cleverly leaves the reader with lots to think about as even when used for good genetic interventions can lead to unthinkable outcomes.

As the story begins with the CIA, it opens in the USA but the bulk of the novel is set in Verona where all of the plot threads come together. One of the main characters is a product of the CIA program, Maya Blake. She has a form of telepathy and can immediately tell when someone is lying. However, her ‘gift’ has put her and her family in danger which is why she finds herself teaching languages in Verona.

Maya’s path crosses with police detective, Livio Marchiori, when she becomes involved in two unrelated murders. At the same time, Marchiori is hunting a serial killer nicknamed ‘The Hypnotist’, who also turns out to be linked to the original CIA project. The novel is full of inexplicable coincidences but it is a credit to May’s writing that within the context of the novel it doesn’t seem odd.

The ‘Hypnotist’ murders are quite chilling and May builds the tension very effectively as he taunts the police with videos of his crimes. The team hunting him also includes Marchiori’s inexperienced partner, Giusto and the Chief Medical Examiner, Abigail Jones. They make for a very likeable bunch who would lend themselves well to a crime series. I particularly like the hint of romance between gruff, no-nonsense Marchiori and Abigail.

The investigation team are joined by American secret agent, Alex O’Neal who also happens to be Maya’s ex-fiancé. He brings a new level of excitement to the novel as he races against time to stop the biological terrorist attack planned by ‘doc’ who moved from the CIA to work for a group of multi-national, corrupt businessmen who have continued to fund his experiments.

I really enjoyed the novel but if I had one criticism it would be Maya who I found really difficult to like. She is so beautiful and perfect that other women seem to feel threatened by her which leads to her isolation. There is a bizarre scene where her best friend turns on her in a vitriolic fashion after yet another of her boyfriends has his head turned by Maya’s beauty. She also behaves in the way that women predictably behave in cheesy horror films – ignoring all common sense and placing themselves in the thick of danger. Having said all of that, the irritation that Maya brought out in me did not detract from the novel at all.

The novel ends in an explosion of violence which will delight fans of action thrillers before finally there is a spectacular twist. May cleverly wraps up all of her storylines in a satisfying ending but still leaves the reader with unanswered questions about the ethical implications of trying to engineer nature.

All in all, I really enjoyed Evo and if you’re looking for a gripping story to lose yourself in for a few hours then I thoroughly recommend this one.

Livio Marchiori, a legendary homicide detective with the highest rate of solved cases in Verona, is faced with The Hypnotist, a serial killer whose modus operandi borders the supernatural and who is as elusive as a ghost. He never touches his victims and he leaves no evidence behind, except for the pen drive showing a dark figure who has the ability to hypnotize people to death…their own.

The more Marchiori digs, the less he finds while the city is on edge with the mayor and the press putting pressure on the police. And when The Hypnotist threatens to kill the love of his life, the chief medical examiner, Marchiori knows that he is quickly running out of time.

So when Captain Victor Miller from Interpol walks into town, Marchiori is more than happy to partner again with the man who two years ago helped him put an entire mafia clan behind bars. But Miller has his own agenda and Marchiori soon discovers that there is more to this than meets the eye, an entire thread of things way beyond his pay grade – secret experiments, dastardly research, and the most terrifying threat humanity has to face.

And just when Marchiori thinks the situation can’t get any worse than this, he finds out that Miller isn’t what he claims to be.

Feeling at the end of his tether and not knowing who to trust anymore, Marchiori begins a race against time to save both the woman he loves and millions of people from dying.