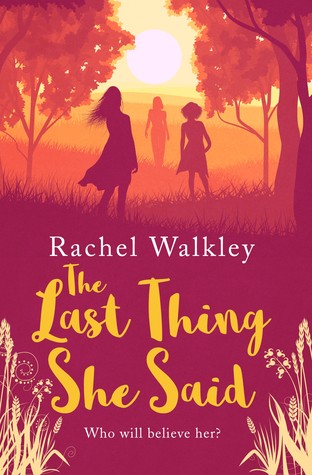 I recently read and reviewed Rachel Walkley’s first novel The Women of Heachley Hall and enjoyed it so much that I had to check her second novel as soon as it became available. And I thoroughly enjoyed it as well.

This is the story of three sisters, twins Rebecca and Leia, as different as two sisters can be (or perhaps not), and younger sister Naomi. Their parents move to the US when the youngest sister is in her late teens and she refuses to go with them. Rebecca becomes her ersatz mother (Nancy, their mother, does not seem particularly close to any of them, although perhaps that is the sisters’ impression) and eventually Leia also moves to the US to work on her medical research.

The three sisters are gifted, although they all have trouble dealing with their gifts, which are very different. Rebecca gives up her career as a lawyer to take refuge at home, bringing up her children and looking after her husband and the house; Naomi, a talented flute player, loves to perform but does not feel confident and dedicates most of her life to teaching music to children; Leia has a big brain and dedicates her efforts to useful research, but hates the limelight and would prefer all the credit to go to her team. Their grandmother, the member of the family that managed to get them all together with her traditional birthday celebration, also had a gift, but most people dismissed her birthday predictions as an eccentricity. When Rebecca starts investigating her grandmother’s past pronouncements —for very personal reasons—, she gets a big surprise.

The story is told in the third person from different points of view, mostly those of the sisters, although we get some glimpses into other characters’ minds as well, and in chronological order for the most part. There are some short chapters that go back to show us past events (there are no lengthy explanations or “telling” in the novel), and these flow logically from the narrative. For example, if Naomi is thinking about the relationship with her parents, her memory might go back to how she had felt when her parents decided to leave the country. It is a great way of layering the background story of the characters without disrupting the action for too long, and it also helps us understand where the characters are coming from, and their reasons for being the people they are. Each chapter and fragment is clearly labelled with the character’s name and the date, and it is not an effort to follow the story, as it flows naturally, at a sometimes wandering but engaging pace.

There are some descriptions of places and locations, but these are limited to what is necessary to tell the story and to allow readers to see it. The story is more interested in the psychological makeup of these characters, and the author does a great work of making us understand them in their own terms. We see each protagonist from her sisters’ point of view first, but on later seeing things from their perspective, we get a completely different picture of them. By the end of the story I was attached to all of the characters, even the ones that at first I was not sure about. And although not all the characters are sympathetic, the novel is not judgmental about any of them, giving them the benefit of the doubt.

I particularly enjoyed the character of Rose, the grandmother, the passages about Naomi’s playing and her thoughts about it (if you read the author’s note at the end you’ll understand why these scenes appear so vivid), and grew very fond of Leia and Howard. That is not to say I don’t like Rebecca and the rest of the chapters from Naomi’s perspective, but perhaps because they are the ones we get to know first, we are on their side from the beginning, and the rest of the characters came as a revelation much later on. There are secrets and lies, but none are Earth-shattering or beyond most reader’s expectations and experiences, and they do not require a huge amount of suspension of disbelief, even the paranormal elements. There is mystery, but the strongest element of the story is the relationship between the three sisters and how they all become more their individual selves by working together and protecting each other.

The novel is both easy to read and beautifully written, and the ending… No, I won’t give you details, but let’s say I’m sure you’ll love it as much as I did. Definitely a feel-good story.

A book I recommend to anybody who enjoys contemporary women’s fiction, optimistic stories about family relationships with a touch of the paranormal, and who are eager to discover a new and talented writer.

Rose’s granddaughters, Rebecca, Leia and Naomi, have never taken her prophecies seriously. But now that Rose is dead, and Naomi has a new man in her life, should they take heed of this mysterious warning?
Naomi needs to master the art of performing. Rebecca rarely ventures out of her house. She’s afraid of what she might see. As for Rebecca’s twin, everyone admires Leia’s giant brain, but now the genius is on the verge of a breakdown.
Rebecca suspects Naomi’s new boyfriend is hiding something. She begs Leia, now living in the US, to investigate.
Leia’s search takes her to a remote farm in Ohio on the trail of the truth behind a tragic death.
Just who is Ethan? And what isn’t he telling Naomi?

In a story full of drama and mystery, the sisters discover there is more that connects them than they realise, and that only together can they discover exactly what’s behind Rose’s prophecy.