Terry has been reading All Those Nearly Fights by Richard Cunliffe 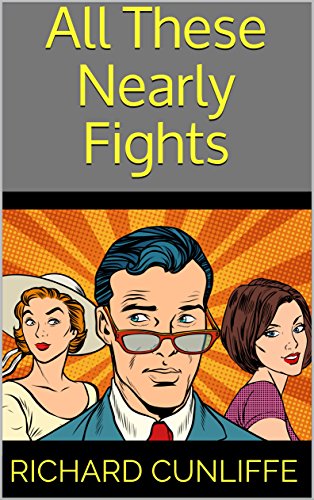 I enjoyed this book, it’s well-written and jogs along nicely – the plot is fairly domestic with only the occasional surprise, but such was the quality of the writing and that all-important characterisation that it kept me interested throughout.

It takes place over five days in any-town, England, mostly in the downmarket car showroom where Jimmy works, and at his home, which he shares with the beautiful and virtuous but rather bland Charlotte. Few people know that Jimmy won the lottery recently, and Charlotte is not one of them.  Before the win, he was planning to start his own garage with best friend Ash, but his new circumstances have affected his plans – and so have the feelings he still has for the gorgeous and fickle Isabel, who broke his heart.

I’ve read a fair bit of lad lit over the years, and notice that the heroes tend to fall into two categories: the cute nerd who makes a big deal out of the lyrics of songs and is trying to win back the heart of a girl (often called Laura), or the more swaggering jack-the-lad who cheats on women and calls his friends ‘mate’, ‘buddy’ and ‘Big Man’ every time he talks to them.  Jimmy Harris belongs to the second crew, which makes for a livelier read.  The other truism about this genre is that the women fall into two basic types: the beautiful, good-hearted and bland, and the sexy-but-a-bit-nuts.  Kind of the Madonna-whore thing.  Charlotte is the former, while Isabel is the latter.  Jimmy spends his time swaying hither and thither in his feelings for the two of them.

The characters who work in the showroom are great, very real, and the sales scenarios were totally realistic; even though I know nothing of this world, have zero interest in cars and loathe sales patter, I really enjoyed reading this side of it.

I was a little disappointed to find that the book ends with no wrapping up of any of the storylines, to be continued in Book 2, Fault On Both Sides, because there is no indication in the blurb that it is not a complete story.  I like continuing stories and am happy with cliffhangers, if I know what I’m getting, but it is not listed on Amazon as part of a series, either.  I turned the page expecting to carry on reading, only to see ‘The End’.  However, I liked it enough to download the sequel on Kindle Unlimited, which speaks for itself about the quality of the book; I do want to know what happens!

It’s a sound debut novel; I would suggest that Mr Cunliffe adds the term ‘Lad Lit’ to his keywords to make it show up in this category on Amazon, and also lists them as a series, with an indication in the blurb for this one that it is only part one of the story.  At £3.48 for the pair they’ll hardly break the bank, and they’re available on Kindle Unlimited, too.  Yes, I recommend!

Crafty car salesman Jimmy Harris has bucket-loads of money, but also has more than a few problems on his plate. This one-time Jack the Lad happens to have won millions playing the lottery, but is yet to work out what he wants to do with his life or who he wants to spend it with.

His biggest dilemma is whether to stay faithful to his gorgeous girlfriend, Charlotte, or try hooking up once more with Isabel, his feisty former partner with whom he feels he has “unfinished business”. Then there’s the question of whether he should still open up the car dealership he’d been planning with his best mate, Ash. And if Jimmy didn’t have enough to think about, he finds himself about to hand over a load of money to someone he doesn’t like on account of his slightly barmy ideas about fate, loyalty and kinship.

Christmas is coming, and Jimmy needs to arrive at some decisions. Join him for five rollercoaster days in December as he begins to make his choices.