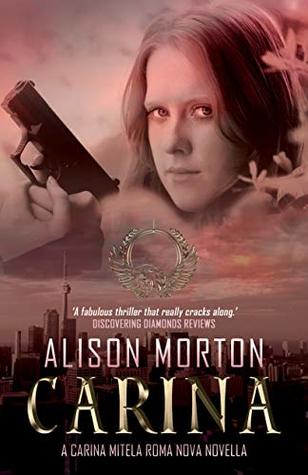 Carina is an alternative history novella. It forms part of the Roma Nova series. These books feature stories of a Roman Empire enclave which still thrives in central Europe, some hundreds of years after the traditional downfall.

Carina is the heir to one of the twelve leading Roman families, but she is also a member of the Praetorian Special Forces guard. She is sent on a mission to Quebec to bring back a person of interest. However, the operation turns sinister, and upon her return she must discover if political power struggles are involved.

This series’ strengths lie with the author’s ability to meld the historical Roman traditions of power, combat and political sabotage with modern day technology and culture. Latin still forms part of Roma Nova’s language as does much of the famed military structure of past Roman armies. But this is not a country clinging to old beliefs, to survive where Rome once fell; the citizens of Roma Nova have adapted and evolved, and I found Ms Morton’s story completely believable.

I always enjoy these books and recommend them to those intrigued by thoughts of an alternative end to a once famous empire.

Carina Mitela is still a young inexperienced officer in the Praetorian Guard Special Forces of Roma Nova. Disgraced and smarting from a period in the cells for a disciplinary offence, she is sent out of everybody’s way on a seemingly straightforward mission overseas.

All she and her comrade-in-arms, Flavius, have to do is bring back a traitor from the Republic of Quebec. Under no circumstances will she risk entering the Eastern United States where she is still wanted under her old name Karen Brown. But when she and Flavius discover a conspiracy that reaches to the highest levels of Roma Nova, what price is personal danger against fulfilling the mission?

Set in the time after INCEPTIO but before PERFIDITAS in the Roma Nova series, this thriller novella reveals hidden parts of Carina’s early life in Roma Nova. And North America isn’t quite the continent we know in our timeline…