Georgia has been reading Christmas Once Again by D.K. Deters 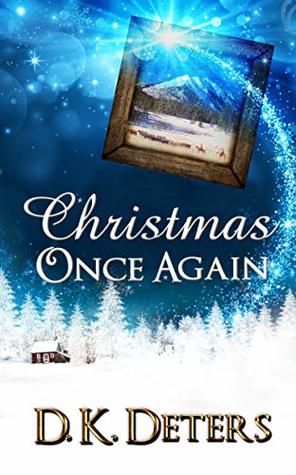 I didn’t do any investigations so had no idea what this story was about, other than Christmas, until I read it. Actually it is not a particularly Christmassy story at all, although it does take place on Christmas Eve.

Madison Knight is broke and working for Once Again Antiques when she gets a call from a Zachary Murdock because his grandmother’s painting has been sold to the shop by mistake and he wants to buy it back.

That initially appears to be no problem until Madison discovers that the painting has already been sold on. The weather is atrocious with heavy snow but Madison goes above and beyond the call of duty to get the painting back.

This is a well-written story with a time travel twist, which I always struggle to get my head around, but it worked well and delivered a nice ending which is just what you want in a Christmas story.

Madison risks her job to track down the artwork, but success falls short when she’s stuck in a blizzard. Stranded, she seeks help from a frontier family. Are they living off the grid, or did she somehow travel through time?

Zach’s the only person who knows her plan. He also knows a secret about his gran’s painting. It’s up to him to rescue Madison, but maybe he’s not cut out to be a hero.