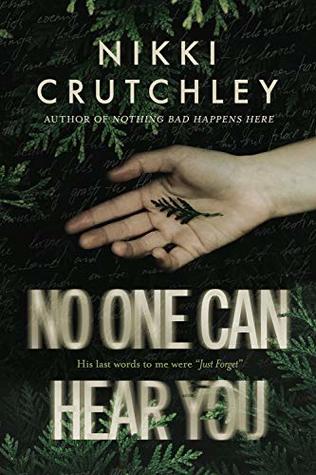 The book opens with an excellent prologue about Faith, a teenage foster kid being abducted, back in 2001.  It then goes back to the main story, about Zoe, a thirty-something, recently unemployed teacher whose life is all at sea, going back to small town Crawton because her mother has died.  Zoe’s feelings about this can hardly even be called ‘mixed’ ~ her relationship with Lilian was cold and distant, and she hasn’t seen her since she was eighteen.  When she arrives in Crawton, though, she is left wondering what really happened to her mother.

Meanwhile, meth-head Megan has been abducted, and is kept prisoner in a storage cupboard.

Despite the themes of abduction, murder and the sleazy underworld of drugs, I’d describe this as a low-key thriller; much of the novel concerns Zoe’s relationship with her mother and the other issues she is working through, and there is quite a lot of domestic and day-to-day conversational detail which, together with the writing style, lends itself more to a dark drama with gradually unfolding sinister developments than edge-of-your-seat suspense.  It’s nicely written and the characterisation is good, particularly Faith, with whom the book opens.  One of the characters has Alzheimer’s, and I thought this was most realistic.

I had a feeling who the baddie(s) might be about half way through, but that’s probably because I watch a lot of TV of this genre; it’s not at all obvious.  The plot is convincing and cleverly structured, I thought the descriptions of what the abducted girls went through was particularly well done, and the ending was good ~ I do appreciate a well-thought out ending.  I can imagine this being the sort of book you might get into reading on holiday.

Troubled teen Faith Marsden was one of several girls abducted from Crawton, a country town known for its picturesque lake and fertile farmland. Unlike the others, she escaped, though sixteen years on she still bears the emotional and physical scars.

Zoe Haywood returns to Crawton to bury her estranged mother Lillian, who has taken her own life. As she and Faith rekindle their high-school friendship, they discover notes left by Lillian that point to two more young women who recently disappeared from Crawton. But Lillian’s confused ramblings leave them with more questions than answers.

As Faith and Zoe delve deeper into the mystery, they become intent on saving the missing women, but in doing so are drawn into Auckland’s hidden world of drugs, abduction and murder. And then Faith decides to confront the mastermind – on her own.