Cathy has been reading Gift Horse by Jan Ruth 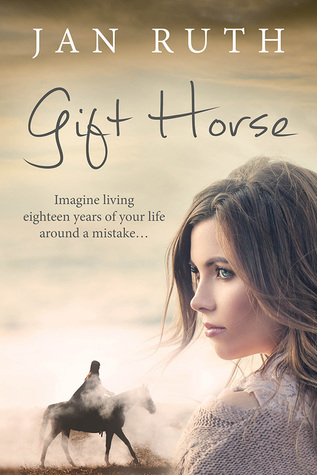 The story is told in chapters alternating between the present and the past, following Caroline Walker’s story over an eighteen year period. Married to Ian with one daughter, Mollie, Caroline’s seemingly perfect life begins to unravel as her worst fears materialise when Mollie suffers a terrible accident during a show jumping competition. Ian has some devastating news when he offers a blood donation at the hospital, in case of emergencies.

Travelling back in time to the millennium, we get a good understanding of the events that influence the present, and the involvement of Niamh, Caroline’s best friend, and her attractive rock star brother. Niamh is planning a New Year’s weekend long party at her parents’ house.

She and Caroline are total opposites. Niamh is part of a large Irish family, which includes brothers, sisters and numerous cousins, and isn’t backwards in coming forwards when it comes to expressing her opinions. Her meddling, albeit with the best intentions, can often make a situation worse than it need be. Caroline is an only child who likes her privacy and is much more self-contained. She and Ian are in an established relationship but are unalike in so many ways, and there’s already a serious issue which troubles Caroline.

‘Ian always knew how to handle Niamh. In fact he knew how to handle the majority of awkward situations. Except for one. It played on her mind from time to time but Caroline had high hopes for their weekend away and watched the passing scenery with a mixture of anticipation and awe.’

Mollie’s accident is the catalyst for the secrets and ill-advised choices from the past to resurface and impact on everyone’s lives. Caroline realises that when it comes down to it, possessions and wealth mean nothing if happiness is the cost. She’s desperate to help with Mollie’s recovery and her hopes are raised when she discovers an equine therapy centre. She believes this could be the answer. The centre reminds her painfully of something and someone she’s never forgotten but also soothes her, thanks to the peaceful setting and Connor (my favourite character) and his sensitivity.

The plot is crisp and concise and the cast of interesting, fully formed and diverse characters, who we get to know through their backstories, are an introduction to the intriguingly involved storyline which unfolds. Emotional issues, human and animal, are treated sensitively and are true to life. An unexpected twist leads to a very satisfying conclusion. Characterisations and relationships are always realistic and identifiable, the locations evocative with engaging storylines. I always enjoy Jan Ruth’s books and this is no exception.

Imagine living eighteen years of your life around a mistake…

Caroline Walker’s daughter suffers a horrific riding accident. Her distraught parents wonder if she’ll ever walk again, let alone ride. And when Mollie’s blood group is discovered as rare, her husband offers to donate blood. Except Ian is not a match. In fact, it’s unlikely he’s Mollie’s father.
Eighteen years previously, Caroline had a one-night stand with Irish rock star, Rory O’Connor. Caroline fell pregnant. Deeply flawed boyfriend, Ian, was overjoyed. And Caroline’s parents were simply grateful that their daughter was to marry into the rich, influential Walker family.
Caroline turns to Rory’s friend Connor; and although his almost spiritual connection with his horses appears to be the balm she needs, Caroline cannot forget Rory, or her youth – both lost to a man she never loved. Eighteen years on and after surviving cancer Rory lives as a virtual recluse in the Welsh mountains. Through his well-meaning but interfering sister, he is shocked to discover he has a teenage daughter. Or does he?