Terry has been reading Quick Fix by J Gregory Smith 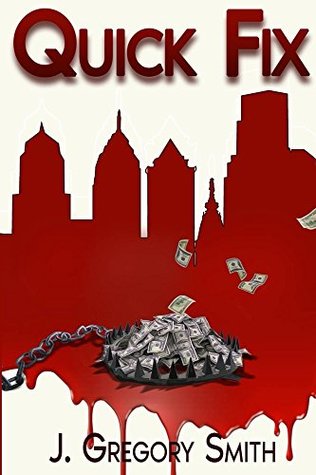 This book has a great opening.  Military contractor Kyle Logan messes up his already messed up life by assaulting his wife’s divorce lawyer, who also happens to be her lover.  He’s then offered a role in the theft of some pieces of valuable artwork, by his friend Ryan.  Kyle is also suffering from injuries caused by an IED when he was in Iraq.

I warmed to the characters and the writing style straight away.  There’s plenty of dark stuff going on, but lots of humour, too – I liked the observations about characters, and often just the way stuff was phrased (‘I hated losing her to a puke like Fenster’).  The guy-on-his-uppers-with-wife-who-has-moved-on-to-a-more-straight-and-successful-new-man thing is an oft-used scenario in this genre in both books and on screen (I’m currently watching the TV series Get Shorty – there it is again!), but it works every time, and J Gregory Smith has painted all participants most colourfully.

When Kyle realises that involvement in Ryan’s criminal schemes means re-acquaintance with childhood chum-turned-gangster Danny ‘Iceballs’ Sheehan, he knows his life is not going to be easy.  Smith has portrayed the atmosphere of the criminal underworld of Philadelphia so well; this book is fast-paced and flows very well, with a convincing plot, and is, basically, a good, solid novel.  I haven’t got anything negative to say about it.  Nice one.