Lilyn has been reading Daughter Of Kali by Shiulie Ghosh 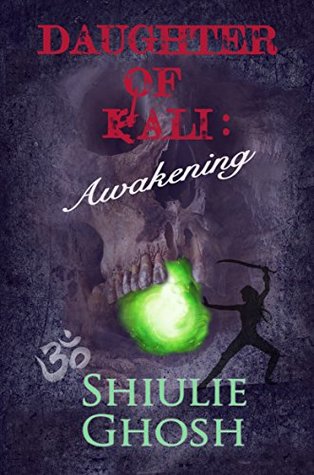 I started ‘Daughter of Kali: Awakening‘ the day after I finished the Deep Silence, the 10th book of the Joe Ledger series. For anyone who has followed that series, you know it’s an extremely hard act to come after. I was fully expecting to mildly enjoy this book at best, as I would be fully enveloped in a book hangover. So, imagine my surprise when I almost instantly found myself liking ‘Daughter of Kali’.

This is a quick, enjoyable young adult urban fantasy read. It’s got a kick-ass Indian version of Buffy the Vampire Slayer (as a mum!), a daughter having trouble coming to terms with her heritage, and a secret society. (Who doesn’t love a good secret society? Especially one aimed at stopping evil.) And, for the age-range that this book is aimed at, there’s an appropriate amount of hormones and a bit of a love triangle.

This does not read like a debut novel. It has a smooth, polished feel to it. The pacing is nice and quick. The dialogue is good. Some of the characters made me laugh out loud. Some made me want to punch them. The fight scenes were fairly generic, but really all you need to know is that people are training and/or kicking evil’s butt, right?

Overall, ‘Daughter of Kali: Awakening’, was a pleasant, engaging read that I breezed through. Shiulie Ghosh did a great job, and I appreciated the diversity that she included in the novel. There was the inclusion of differently-abled, of LGBTQ+,  and of course, the main character – who wasn’t a perky little white girl!

Kaz Deva just wants to be a normal 15 year old. She has normal problems after all; she never knew her dad, she’s the only Indian girl in school, and the boy she’s crushing on prefers her best friend.

But when her teacher turns into a monster before her very eyes, Kaz is drawn into a world of demons and gods, myth and magic. Nothing is as it seems – her Mum has secret superpowers, and there’s a shadowy organisation hidden on her doorstep.

Kaz discovers she’s part of a long legacy of Warriors dating all the way back to the Hindu goddess Kali. But where does she fit into this ancient battle? What does Kali want from her? And can she control her own awakening powers before it’s too late?

Shiulie Ghosh is a TV news presenter. She was born in the UK to a Bengali father and English mother, who moved the family to India for several years when she was a toddler, thus instilling in her a life-long love of chicken curry and riding on trains where you can actually hang out of the door.
She grew up to be an award-winning journalist, and over the past twenty years has worked for some of the biggest names in the business including the BBC, ITN and Al Jazeera. She has covered major global stories including the Kosovo War, the Asian Tsunami, the death of Nelson Mandela, and the Arab Spring.
She was the first anchor to go on air for Al Jazeera English when it began broadcasting from Qatar in 2006 – eventually reaching 200 million homes. She lived in the Middle East for nearly ten years, before returning to the cooler climes of south-east England.
She helped to establish the London bureau of the 24-hour international news channel TRT World, which was launched in 2015. She now splits her time between anchoring news bulletins, and moderating conferences for high-profile clients such as the pharmaceutical and finance industries, the UN and the WHO.
In between she tries to squeeze in more writing, and would like to get a second book out before she dies of old age.
Her main interests, apart from being a news junkie, are reading, writing and travelling. She lives in Buckinghamshire with her husband, her daughter, the cat, and some chickens. 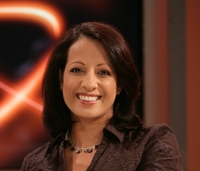