Olga has been reading Scorn by Paul Hoffman 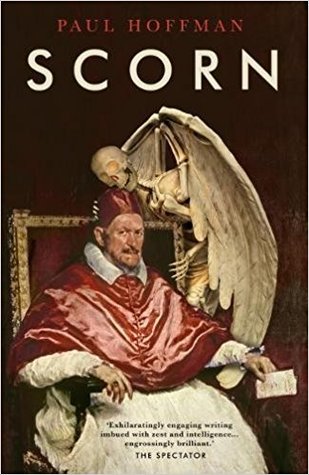 When I was first approached about reviewing this novel I was beyond intrigued. It sounded like something utterly unique and out there. I wasn’t sure it would suit my reading taste, but I knew I had to read it because it sounded like nothing I had read before. And although it took me a while to get to it, I am happy to report my first impression was right. This book is… extraordinary.

Yes, this book is extraordinary because it is out of the ordinary, pretty much so. If we try to define its genre, we’ll have many difficulties. Is it a thriller? There is a pretty special serial killer (those of us who regularly read thrillers know that they are becoming more and more bizarre and extreme, but this one is beyond the usual, even by modern standards) and a series of murders and desecrations connected by a several cryptic clues (yes, crosswords also come into it), but it has too many other elements that do not fit in well with this genre. There are mystery and police-procedural elements to a point, and a couple of interesting and quirky detectives (Scrope and Lister, both from the upper crust with outstanding education, interesting connections, and an armed forces background), and a female PC, Molly Coates (a heroine of the working classes, from the North of England and from as different a background as possible to the dynamic duo but as clever).

There is a paranormal/fantasy element (well, there is a wolf/shifter involved, and there are references to other creatures that might fit into a number of different categories), but the plot takes place in the world we live in (scarily so at times) or a close version of it with ‘interesting touches’ (some fictional, some are a matter of interpretation). There is a scientific explanation for some of the events (involving the Large Hadron Collider) that could put one in mind of science fiction novels, but this is not the main focus of the plot.

There are plenty of references to religion (which is one of the main themes of the book, in particular, the Roman Catholic Religion) but a word of warning, I think truly devoted and orthodox followers of the Catholic faith or even convinced Christians might feel offended by some of the content. There are also plenty of references and a focus on current and recent events (like the sexual abuse of children by members of the RC priesthood, there are also comments about politics, media, and political figures, some international but many centred in the UK, and we have close encounters with preeminent figures like Tony Blair, the Queen of England, the Pope…) but although the references are accurate and there are plenty of quotations from books, newspapers, media, and the internet, these are weaved into the story and it is not non-fiction or a factual account. As I mentioned already, there are plenty of details about everyday British life peppered through the book, and although in my opinion it is not necessary to be British or an expert on the UK to fully understand or enjoy the book, I think people with a good knowledge of UK politics, society, and current affairs will find much to enjoy (and think about) when they read this book. There is also romance, a story of opposites attract that goes beyond the conventional, but it is only a subplot (and not typical of the romantic genre).

Oh, and there are some illustrations (like ink etchings) of characters and events in the book, but I wouldn’t call it a comic, or a picture book (although they add greatly to the overall effect).

The book has also an extraordinary narrator that from very early on challenges the readers, promising some things (a great twist at the end, that, let me tell you now, he delivers), coaxing them, warning them, and never letting them become too complacent or ‘safe’. The narrator, whose identity readers will wonder about for much of the book, is opinionated, has strong points of view and is not, and never pretends to be, a neutral observer. He is witty, well-informed, dismissive at times, rude and pushy, but never ever boring. Scorn, the title of the book, is the mode of much of his narration, and I loved his voice from the beginning, but if you don’t, you will have difficulties with the book. I always recommend readers to check a sample of the book before buying, and this is one of those cases when I feel that is a must. Although some of the narration, mostly to do with the investigation and the main characters (I am trying not to reveal too many details of the plot, but let’s say, things are not what they seem, as most readers will suspect from the beginning) is written in the third person, much of what makes the book special and gives it its structure and its distinctiveness is the narrator.

Do not get me wrong, though, there are plenty of other characters, like the investigators I have mentioned, whom we get to know quite well and whose personalities and adventures would provide sufficient material for gripping, if more conventional, novels in their own right. There is also Aaron Gall, the character at the centre of the plot, who is both the anti-hero and victim, and also acts as a catalyst for the action in the book. We get to know him, and the rest of the characters, quite well, and he is also a stand-in for the many people who have survived abuse (more or less extreme) at the hands of those who were supposed to be looking after their education and spiritual well-being. If I had to choose, my favourite would be Molly, perhaps because I have more in common with her than with the rest of the characters, and Lou, the therapist, but they are all interesting and likeable. Here I am referring to the main characters. Some of the other characters, many of whom we only get temporary glimpses of (including the victims) are not necessarily likeable, but they are far from caricatures or cut-out types, and we do get insights into their thoughts and motivations that make them, if not sympathetic, at least real and human. And, that includes the guest appearances by true historical figures.

I have tried very hard not to give away much of the plot, although I hope my mention of some of the themes would suffice to get prospective readers interested. I found it a compelling read, both due to the main storyline, and also to the detours, the narrator comments, and the fanciful asides. But this is not a book that zeroes on the action and dismisses anything that is not relevant to the plot (in that way it is perhaps more of a literary fiction novel, but not quite either). This is a long book that meanders on and off through tangents, which eventually we realise are relevant to the overall book but not always to the thriller part of it, so if you’re an impatient reader looking for a light and thrilling read or a who-done-it, this might not be for you. The style of writing is breath-taking, a tour-de-force, with detailed but clear explanations of scientific points, collections of facts and events that make for gripping reading, psychologically astute descriptions of characters and their motivations, philosophical and moral commentaries that will make readers think, and I highlighted so much of the book that I found it almost impossible to choose some fragments to share, but I will try (avoiding major plot points as well):

But that’s the thing about human beings. It’s not laughter or the ability to stand upright that distinguishes man from the animals, it’s the capacity for incompetence. When any other creature makes a mistake, it gets eaten.

It was a truth universally acknowledged in the police force that the middle classes were generally terrified of the police and would shop their grannies without a moment’s hesitation once a cop asked them a question.

Ever had a sudden moment of realisation, an epiphany of the truth that marked out a momentous line in the sands of self-knowledge between everything you thought was the case about the kind of creature you were and everything that was really true? Neither have I.

I have already warned readers about the religious aspects of the book that might not sit well with many readers (no, this is not a Christian book in the usual sense, probably a book that in certain circles and in eras past would have been called a ‘wicked’ book), and there is also violence and some sex scenes (the violence is far more graphic than the sex, in fact it is so extreme that the effect is somewhat cartoonish, but I am not squeamish, so don’t take my word for it). It also deals on a serious and difficult subject, and although it does so in a peculiar way, it does not shy away from the most horrific aspects of it. Having said all that, this is a book I thoroughly recommend. It is not a book for everybody, as you’ll have surmised if you’ve read the rest of the lengthy review (sorry. I got more carried away than usual), but if you like to challenge yourself, you love outlandish thrillers, cryptic crossword clues, unique scornful narrators, satire, and are looking for a new author to follow, do yourself a favour and check it out. It’s a ride on the wild side.

After an experiment at the Large Hadron Collider goes horribly wrong, depressed scientist Aaron Gall wakes up to discover his mind and body have undergone an astonishing transformation. Now bursting with the joys of life, he is inspired to undertake a radical new therapy: to talk to the priests who brutalized him and his school friends, point out the intellectual dishonesty and inhumanity of their religious beliefs – and then eat them. Aaron enjoys the process so much (as well as taunting the police and MI5) he decides to extend his murderous conversations to include the Archbishop of Westminster, recently converted Catholic Tony Blair, the Queen of England – and, finally, the Pope himself. But a Catholic Church that has given the world the Crusades, the Inquisition, and Papal Infallibility hasn’t survived for two thousand years without a reason. Aaron is in for the greatest shock in the history of mankind.