Cathy has been reading Finders, Not Keepers by D.E. Haggerty 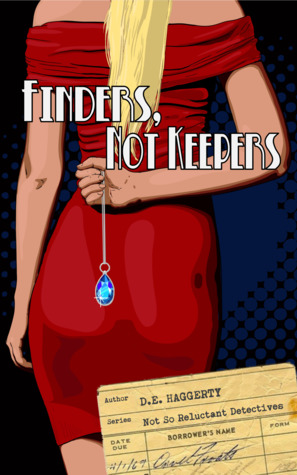 Terri is in the process of sorting through the boxes in the attic for something her ex husband wants, annoyed with herself for not forcing him to take his stuff when he moved out. When her friend, Melanie arrives she helps Terri get the boxes downstairs. Later, as Terri is cleaning the now box free attic she makes an astonishing discovery. Hidden in a corner is a necklace. A large pear shaped diamond on a platinum/white gold chain. Terri is understandably utterly astounded.

Terri is determined to find the previous owners of her house and return the diamond. Luckily her super hot next door neighbour Ryder, is a private investigator – the perfect person to ask for advice. Even though it was easy to find the previous owners, a Mr and Mrs Collins, returning the necklace proved trickier as they didn’t want it. It transpired the necklace had belonged to their niece, Jessica.

‘Mr Collins cleared his throat. “Our niece Jessica was only twenty-five when she was killed.”

Terri gasped. “Killed? Oh no! What happened?” She leaned forward, her coffee and pie forgotten.

“That’s what we’d like to know,” Mrs Collins snapped. Her husband reached over and grasped her hand.

“She was murdered three years ago,” he explained.’

Both parties come to the decision Terri should check out local charities to try and find the one that meant most to Jessica, and donate the diamond. Terri’s research, and Melanie’s wanting to solve Jessica’s murder, lead them both into danger and Terri is (very) occasionally glad Ryder is so protective, however he does have some anger issues when it comes to Terri getting herself into trouble. Maybe a touch too much alpha male but he’s genuinely worried for Terri. However it’s soon apparent that Ryder wants much more than a neighbourly kind of relationship with Terri, but is willing to wait and take things at her pace. A definite point in his favour.

Terri and Melanie are total opposites, and it’s usually Melanie doing the instigating with Terri going along with whatever crackpot idea Melanie dreams up. They’re a great foil for each other. I loved the fact that Terri is a librarian and each chapter heading is a librarian related quote. Well written in the third person from Terri’s perspective, there’s a good dynamic between the characters.

An entertaining cosy murder/mystery with an interesting cast of characters.

What do you do with a diamond no one wants? You can’t keep it. Or can you?

While cleaning her ex-husband’s effects out of the attic, Terri finds an exquisite diamond pendant necklace. She’s determined to return the necklace to its proper owner, but the owner was brutally killed, a murder which remains unsolved, and her heirs want nothing to do with the diamond. Terri embarks upon a journey researching charities to which she can donate the diamond. When her research becomes dangerous, Terri contemplates solving the murder herself. Her best friend, Melanie, jumps feet first into investigating the murder, but her neighbor, Ryder, doesn’t want Terri exposed to any danger. Ryder, to Terri’s surprise, also wants to be more than neighbors with Terri. Luckily, he’s prepared to take any measure necessary to keep her safe because someone is determined to stop her inquiries.

Join Terri on her quest to find a home for the diamond, which may result in the unveiling of a murderer – if she survives long enough.