Liz has been reading Gold Plated by Christine Campbell 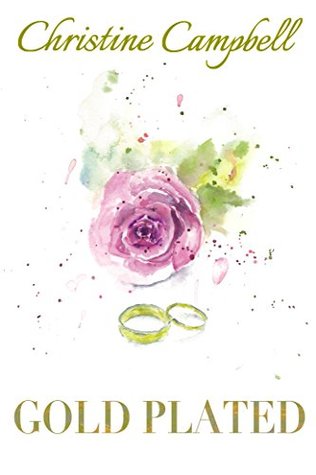 Rosanna and Paul are celebrating their Golden Wedding with a grand party at the local Golf Club.  Aided by their only daughter Heather, Rosanna is making sure that everything is perfect including baking a delicious cake and buying Paul the ideal gift, but have all their years together been so perfect?

The clock is turned back to 1964 when Rosanna started at Art college and Paul was her young, charismatic tutor.  Lacking confidence in herself, she was astonished that he chose her as his “secret” girlfriend, but against all odds, they have now been married for 50 years.  Abandoning her earlier artistic ambitions, Rosanna has looked after their lovely home while Paul continued his successful teaching career.

Christine Campbell is skilled at putting us inside Rosanna’s head.  We begin to understand her calm, quiet personality and her loyal, loving nature.  We can see that Paul takes her for granted but they seem to have a happy marriage.  But at the party everything changes in a dramatic way. Secrets are revealed, treachery exposed, and Rosanna’s life is in tatters.

This is a story, with which we can all identify in some way.  It is sadly true that many women, and men, can suddenly find themselves alone as old age approaches and dealing with the collapse of all they believed in can be catastrophic. But this is not a sad story, there is a positive message that life is what we make of it and Rosanna discovers new personal qualities of independence and self-reliance as well as rekindling her creativity.

Personally, I would have preferred the story to have been written in the past tense, especially for the scenes from the past, but that is probably just my particular bête-noire!  The detailed involvement in Rosanna’s rollercoasting emotions and cleverly plotted, surprising events make this book a very rewarding read.

Rosanna and Paul are celebrating fifty years of marriage.
Their daughter, Heather, has helped plan their Golden Wedding Anniversary party, and it looks like being a wonderful night: sixties music, all their friends and family present, and Rosanna has bought the perfect golden gift for Paul.
What could possibly go wrong?
When an uninvited guest shows up, Rosanna’s world is shaken and she is forced to look back over their fifty golden years and see them as they were.
Were they golden? Or just gold-plated?