Noelle has been reading Long Shadows by Thorne Moore 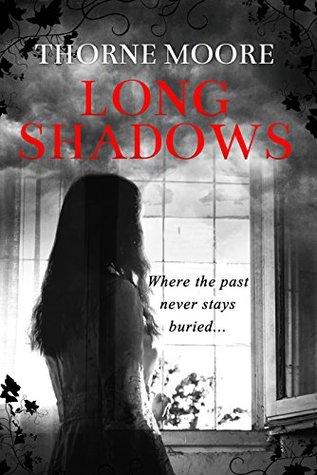 I do love books about old houses, having grown up in one myself. This book details the history of the different form of a house and its main occupants from the Victorian times of the 1880s, to the time of witches in the 1660s, to medieval times of the 1300s, in that order. Llys y Garn is an estate in Wales with a history that goes back centuries, and the author has woven tales of the estate at these three different time periods.

The first story, The Good Servant, is set in the Victorian era, when the house is a rambling Victorian/ neogothic amalgam of many rooms. There is a distinct upstairs/downstairs, where the survival of a servant, with endless days and nights of back-breaking labor and a bleak, loveless future, hinges on the good will of their employer – who can dismiss them for any perceived transgression, even a minor one. The tale follows the career of Nelly Skeel, an ugly woman who works her way up through the hierarchy of life below the stairs. She is not loved or even liked, but when she encounters the orphaned and unwanted nephew of the manor’s owner, she eagerly takes on the task of being his mother, giving him the love no one else will and only hoping for his love in return, while scheming to avoid dismissal.

The Witch is the second tale and takes place in the 17th century; it tells of another strong-willed woman, whom her father plans to use as a pawn in marriage to advance himself. Llys y Gar is a Tudor residence with a crumbling great hall. Devereux Powell’s daughter Elizabeth is isolated there with her two brothers to be raised by her grandmother, who is devolving into madness fixed on the dark doings of the Devil. Clever and strong-willed Elizabeth loves Llys y Garn and wants to remain there but is unsure of whether her life is at God’s will or the devil’s. She manipulates her father into accepting her betrothal to a childhood friend, Huw, who is of poor nobility and lives on a nearby farm. She assumes her dowry will be Llys y Garn. But it seems the devil has other plans for her, and tragedies ensue.

The third and final story is set in medieval times, which despite the chattel status of women in the previous two tales, is yet more harsh in their treatment. Little is known of what stood on the land of Llys y Garn in the 1300’s, but it was occupied by the family of the loud and brutal Owain ap Elidyr. Angharad’s story opens with a birthing gone horribly wrong, leaving her and her older sister Marged and younger brother Ieuan motherless and subject the whims of the despotic father, an impoverished descendant of a royal line. Angharad’s one joy in life is attending Curig’s fair, where she meets a girl of her own age, Johan, daughter of a cloth trader.  Their meeting becomes an annual thing and Angharad longs to live Johan’s life, traveling to distant lands, eating exotic food and wearing nice clothes. Like Marged, however, she will be used as an asset in marriage as her father plots to expand his land and recover old rights. In overcoming horrible odds, Angharad has the happiest outcome of the three women.

The author has written a book with a sweep of time similar to books by James Michener, but much more limited in scope and place. I had expected the three women would be bound by an explained lineage, but instead found the link was their resistance to the roles demanded by society. This, even more than Llys y Garn, binds the narrative.

The female characters are well-limned and compelling. Their strength in the face of implacable norms and demeaning roles sticks with the reader. It is unfortunate the men, with one exception, are depicted as priggish, selfish, self-serving, brutal and bullying – this certainly elicits fear and loathing, but I longed for a few sympathetic or kind men.

This author is known for her historical research, and it shows. The detail is impeccable and sets three distinctive scenes. The dialogue is crisp and reasonable for each of the time periods. While the brutality and gore of some scenes might drive away a few readers, it is appropriate to the stories and the times.

I would definitely pick up another book by Ms. Moore.

The Good Servant is the story of Nelly Skeel, loveless housekeeper at Llys y Garn at the end of the 19th century, whose only focus of affection is her master’s despised nephew. But for Cyril Lawson she will do anything, whatever the cost.

The Witch tells of Elizabeth Powell, born as Charles II is restored to the English throne, in a world of changing political allegiances, where religious bigotry and superstition linger on. Her love is not for her family, her duty, her God or her future husband, but for the house where she was born. For that she would sell her soul.

The Dragon Slayer tells of Angharad ferch Owain in the early decades of the 14th century. Angharad is an expendable asset in her father’s machinations to recover old rights and narrow claims, but she dreams of bigger things and a world without the roaring of men. A world that might spare her from the seemingly inevitable fate of all women.

In these three tales the rooks of Llys y Garn have watched centuries of human tribulation – but just how much has really changed?