Azimuth is a fantasy adventure. Although this book is called Book One of the Rahki Chronicles, I discovered that the story follows on from an earlier book entitled Nadya’s World, which I haven’t read, but I was able to pick up the storyline fairly easily. The setting is modern day America.

A prophecy surrounds two people, a gifted child who is a seer and her female protector. Together, it is said, they will bring changes to the gypsy style Rahki peoples. The Rahki consist of twelve tribes who each follow different animal spirit guides.

We meet Mia; once orphaned, she knew nothing of her heritage until recently. Now, she has been asked to protect eight-year-old Nadya. They must travel on a quest from Virginia to California, where they will attend a Sovmar or meeting of the clans. But there is unrest and danger from those who seek changes between the clans, wanting power for themselves. This unknown danger is intended to spread the belief that Mia and Nadya are not those mentioned in the ancient prophecy.

An escort travels with Mia and Nadya. It consists of two warriors, a doctor and a Romani witch, who must prepare and protect Mia and Nadya for the future they face. Whilst on their journey the group’s route initially has them meeting representatives of other clans. It is hoped that when they meet Mia and Nadya face-to-face, the duo’s spirit powers will shine through enough for the clans to want to trust and support them at the Sovmar. But danger is always lurking, and the group find they are being followed. This book covers the beginning of their journey; it will continue in the next one of the series.

It took a little while to grasp the concept of the story and there were quite a lot of characters who were introduced at the beginning. But once I had both the story and the main characters sorted in my head I enjoyed the tale. The spiritual elements of the book appealed to me, as did the blend of modern day technology and familiar settings. This made a difference from other fantasies that are set entirely in an imaginary world.

Trapped in an office job, Mia Rayner dreamed of adventure.

And then it came true.
When she finds the body of her Gypsy teacher, Mia’s life will shift into a blur of martial arts, mythology, and murder. Taught by the enigmatic Cayden Jodhani, she’ll learn the warrior’s path in a Rahki world where magic hangs heavy between Mia and her destiny. With a young orphan by her side, Mia will have to fight to earn her place as Nadya’s guardian protector. Ancient prophecies claim she and the gifted child are destined to save mankind; Mia is more worried about saving them from the next attempt on their lives.
However, some epic journeys do start with a stumble.

I share several similarities with my fictional characters (heroes and villains alike) including a love of chocolate, horror movies, martial arts, yoga, and travel. I don’t have a pet mountain lion but am proudly owned by three rescue kitties. We live in relative harmony in beautiful southwestern Virginia. 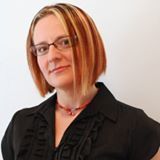