Noelle has been reading The Survivor’s Club by M.K. Martin 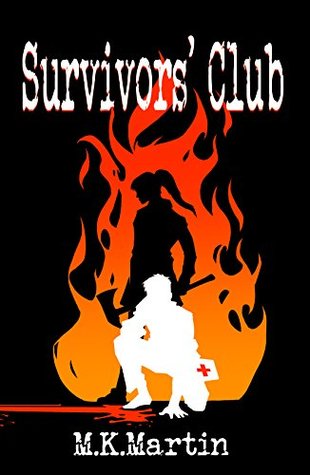 Although this is a review for Rosie’s book review team, I purchased a copy.

Survivor’s Club was exhilarating. Reading it felt like Mr. Toad’s Wild Ride. After a gradual start with lots of ominous clues portending something nasty, you’re off. I read this book because it was listed as sci-fi, a favorite genre of mine, but I consider this also in the horror genre. I couldn’t sleep the night I first started reading it.

Geneticist Marius Tenartier, a wide-eyed viral geneticist who wants to save the world from its worst diseases, is hired by Chrysalis Biopharmaceuticals, ostensibly because of his background. He doesn’t know he possesses something within him that Dr. Viers, the head of virology at Chrysalis wants and has gone to unspeakable lengths to find. The isolated setting of Chrysalis, miles from anywhere in the desert, and the unbelievable levels of security, immediately set off bells, but it was not until Marius is sent to pick up Dr. Viers’ daughter Miranda at her private school that the truly bizarre begins.

Marius is accompanied by John Courage (aptly named), the head of Chrysalis Security, and several more members of the security team, but their helicopter is downed when it hits some large, strange birds. The three survivors of the crash, including Courage and Marius, hike to the school, where they are attacked by some large dog-like creatures. From there, it’s the rushing, a downward part of the ride until the story climbs again. More I will not say.

For the most part, the characters are well-drawn but close to the edge. Amberlee Simms, the company’s CFO, teeters on the edge of caricature as well as on her stilettos, John Courage proves inhumanly hard to kill, and Marius is a genius jack-of-all-trades in his ability to improvise and his insane bravery. His transition from naivete to suspicion, however, did seem to take a long time. Miranda, the third member of the Survivor’s Club along with Marius and John, vacillates between self-absorbed teenage behavior and dreaming about Marius and truly unselfish acts. The creatures are gory and frightening, but when I pictured them I had to smile – they would make for great anime.

The writing is spare but nimble; there are no long, drawn-out discussions about corporate greed, which is a sub-plot, or scientific morality. The aim of the author is action, and we get a lot of that. The science, something I have often criticized in other sci-fi books, is credible although beyond cutting edge – so the premise is believable. The book is written from multiple points of view; thus the reader has to stay alert. After the first transition and this recognition, it was an easier read.

All in all, this is a satisfying sci-fi (and horror) read. I recommend it, if this is your genre, and guarantee you’ll enjoy it. I’d welcome a sequel.