Georgia has been reading Dilemma by Stephen Bentley 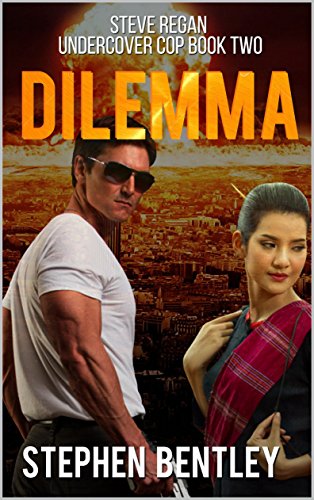 I chose to read this book as a member of Rosie Amber’s Book Review Team.

This novella has a gripping opening as it starts with three bombs simultaneously exploding in three Italian restaurants in three different cities. The deaths caused and the fallout from these explosions resonate throughout the story.

Bentley is a former undercover cop and therefore writes his main character, Steve Regan, with great insight. It is also clear that he has lived in, and is very familiar with, Thailand although I felt at times there was a little too much telling rather than showing me this knowledge.

It may be the name of the main character that instigated this thought but as I read the book I was reminded of cop shows of the 70s. The writing was stark and brutal with little emotion and as the state-of-the-art comms room towards the end is described as having typewriters I guess I could be about right with when it was set.

I did finish the read but felt it would have benefitted from tighter editing and possibly a proofread as well to help avoid some distracting typos. This is the second part of a planned trilogy which might interest those readers who like crime fiction but this author has also written a very well received memoir of his part in Operation Julie which I think they would also find fascinating.

Steve Regan is back and this time he’s alone and undercover in a seedy area of Thailand on the trail of a Texan expatriate, Les Watkins, the biggest drug smuggler in South East Asia.

Using himself as the bait, Regan attempts to score a $50,000 deal with the Thai mafia in an effort to get closer to his target.

As he finds himself embroiled deeper into the operation, Regan suspects Watkins may be connected to Regan’s nemesis, ruthless Mafia boss Carlo Vitale, who has fled the United States following a triple bombing and assassination of three crime family heads.

Besides staying alive, Regan has other problems when he suddenly finds himself facing the worst dilemma an undercover cop can face.

Dilemma is an edgy, suspenseful tale with a twists and turns plus a sprinkle of romance.

Stephen’s memoir Undercover: Operation Julie – The Inside Story was published in September 2016 and rapidly became an Amazon UK #1 Best Seller in two categories. It tells of his undercover role in infiltrating one of the world’s largest ever drug rings.

Keeping in tune with the undercover theme, Stephen has now published the first book in a trilogy based on his undercover cop days.

When he is not writing, Stephen follows Liverpool Football Club from afar and enjoys the beaches of the Philippines. He is often to be found on the beach with a book and a cold beer.