Judith has been reading Clone Crisis by Melissa Faye 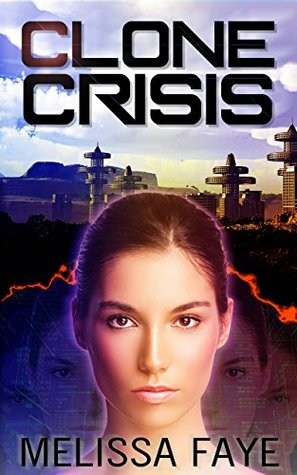 Clone Crisis shares some similarities to The Hunger Games series by Suzanne Collins or the Divergent series by Veronica Roth. In style, it also reminded me of another good YA book I read called UnBlessed, written by Crystin Goodwin.

The dystopian idea of a fertility crisis immediately makes me think of novels like Margaret Atwood’s The Handmaid’s Tale or Aldous Huxley’s Brave New World. Plus, filling the entire world with replicas of a previous generation is a chilling prospect.

Clone Crisis has some fun scenes and it has an interesting cliff-hanger, leaving space to explore the consequences of Yami’s actions.

Speaking of Yami, I thought the character names (e.g. Yami, Etta, Vonna) were almost at risk of being weird for the sake of being weird. A small thing to notice, I know, and not a serious issue (other names like Katniss, Triss, or Kisara aren’t exactly normal either).

I also thought some of Yami’s interactions with Ben, her ex-boyfriend, were a bit clunky. I understand things can be frosty between exes, but their dialogue came across as unintentionally awkward.

As a piece of feedback, I think the overbearing, authoritarian nature of the community leaders could be emphasised more, in order to clarify the cruelty of the community and help the reader support Yami’s own actions more.

However, I really don’t have much to nit-pick. Clone Crisis was an enjoyable read, and if you like the dystopian titles I’ve already mentioned throughout this book review, I’d recommend this series to you.

In the 25th century, the entire population of the world is a clone of a person born hundreds of years earlier. Without parents and family, what’s best for the community is best for all. That means going along with the career assignments that divide society by class, working towards finding an end to the fertility crisis, and obeying whatever the government decides is best.

Yami, a driven but closed off medical intern, has avoided building new relationships after her mentor disappeared years ago. She can’t hide from the world anymore when her best friend, Etta, gets pregnant for the first time in three hundred years. Yami begins a journey to protect her friends at all costs. But when more and more secrets are uncovered about the government they all trust, Yami is forced to question the walls she’s built up around for herself.

What’s best for the community may not be best for any of us.