Robbie has been reading The Yak Guy Project by C.S. Boyack 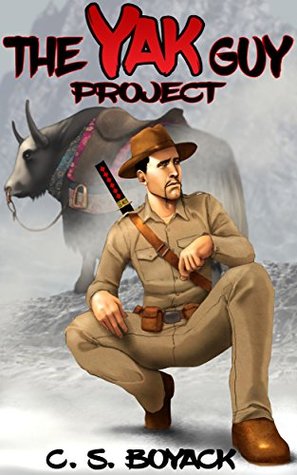 I have read a few of Craig Boyack’s books and I really enjoy his writing. I found this story particularly enjoyable.

The nameless hero of the story wakes up in the middle of a desert with a bullet in his head and no memory of what happened to him and how he got there. He is rescued by a talking Yak who is there to help him learn to become a useful part of society. Our unusual hero has lived a life of laziness and has spent his days sponging off his friends and anyone else who comes along.

Our hero sets off on an usual journey in a post apocalyptic world where war has destroyed the sophisticated and technologically advanced societies that lived there previously.  The hero meets a prototype, a human like creature that teaches him a lot about the art of survival such as identifying edible plants and other useful natural resources.  The prototypes salvage food and other recyclable materials from the remains of the destroyed cities, villages, aeroplanes and vehicles that scatter the country side. The prototype also teaches the hero the importance of reflection and thinking about what you want from life and how your individual actions impact on the natural world.

When the hero reaches a point in his emotional development where he is ready to re-join his own kind, the Yak reappears and they set off together to find one or other of the survivals who have formed themselves into rival groups. The hero still has lessons to learn about love, loyalty and teamwork.

I really enjoyed the hero and found his personal journey from a selfish and spoilt man-child to a reliable and resourceful man very interesting. The story was fast paced and entertaining and I enjoyed the fantasy world that the writer created.

Imagine waking up in the desert with no idea what happened to you. You have clear memories of situations and places, but a complete loss in personal matters… like your own name. This situation is bad, and you have no idea how to get home.

When you’re rescued by a talking yak, the situation gets exponentially worse. You’ve obviously lost your mind. The immediate needs of a ride off the salt pan and searing heat, along with a drink of water, outweigh the concerns about your mental state.

This is exactly what happened to the Yak Guy. In fact he’s been placed in an alternate world and given a chance to start over in life.

Can this selfish, almost parasitic, young man learn to start over in a world where charity is hard to find? Life is brutal and short here, but he’s going to have to adapt or perish.

The Yak Guy Project is loosely based around The Fool’s Journey from the Tarot. Those with experience in Tarot will spot people and situations from the Major Arcana.