Today’s team review is from Sandra

Sandra has been reading Shark Bait by Matt Walker 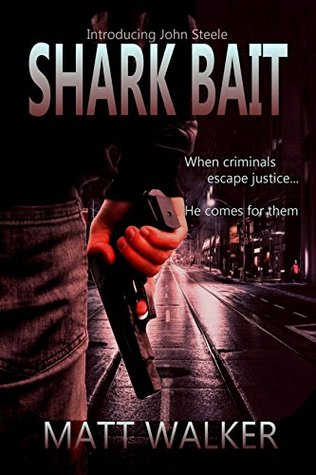 Shark Bait is the story of John Steele, a licenced government assassin sent to take out drug dealers, the Carlucci brothers. He was on his way home, his job was done, when Jeremy Peters stumbled into his path, and the situation got very messy, very quickly. The action moves at a breakneck pace (the whole story happens over a week-end) with no let-up as bad guys are coming after him from all directions. It is narrated in the first person by Steele with alternating chapters by Gary Brooker, small-time crook and loan shark. This lends immediacy to the action; the reader feels as if they are right in the middle of it. So now, not only are the remaining Carlucci gang after his blood, but Gary’s thuggish henchmen are hot on his trail as well. He can’t afford to let his guard down for a second.

I really enjoyed this debut by Matt Walker. John Steele is very likeable despite what he does for a living and that is not an easy thing to pull off convincingly; he is tough when he has to be but not unnecessarily so. I look forward to reading Devil’s Breath, the next one in the series.

“I’m no hero. I’m a Licensed Vigilante. And I kill people for a living.”

Government hitman John Steele has just completed his current contract, and has the bullet wound to show for it. That’s when he meets a vicious criminal loan shark called Gary Brooker. But Brooker has got his own problems. He’s picked on the wrong guy.

SHARK BAIT is an all-action thriller that will leave you breathless, and the first novel introducing Licensed Vigilante John Steele.