The Magpie King by M.J. Fahy

The Magpie King is a middle-grade fantasy tale aimed at readers aged between nine and thirteen years old.

Tatty Moon is a faerie who lives with her family in a willow tree in Little Upham. Her best friend is Will Patch, an elf. Together they have an adventure which involves evil birds, a faerie gone bad, and a queen who sends them on a quest.

The story has a mix of nature spirits and human adults in an old-fashioned style country setting. It included many ideas that were familiar to me, from classic children’s books: a fall down a hole, magic shrinking powder, a lightning bolt and a scar. I wondered if it may have been written with a specific set of readers in mind, maybe as an homage to those favourite stories. A nice idea, and, if so, it might be an idea to allude to this in an introduction. There is always a danger when including favourite elements from other works into your own that comparisons will be made by readers. If this has been done unintentionally, I would suggest the author modify some of the ideas.

This is a long story and has a lot of characters and secondary storylines. As such, I thought it may not suit some younger readers of the age group. In other areas, much of the dialogue is written using a regional dialect and, at times, dated jargon.  I think this was overdone; just a sprinkling would have been enough.

Feasibility even in fantasy is one of the areas of editing that needs consideration, as is awareness of one’s target audience.  One character rides a much loved Chopper bike. As these were popular in the 1970s (almost fifty years ago), I think the detail of the whole incident with the bike is going to be missed by today’s young reader.

Overall a story with some good elements, but perhaps could use with some slimming and a little more thought, particularly with the dialogue style.

Tatty Moon must rid Little Upham of magpies, rampaging Gnomes, and the Queen’s ambitious nephew. Not easy when you’re only three-and-a-bit inches tall! Will anybody help? …Perhaps. (Book One in the Tatty Moon series.) A children’s fantasy story aimed at Middle Grade (9 years and upward) readers.

M.J. Fahy lives on the south coast of England and writes and illustrates middle grade fiction from a writing shed in her garden. She is married with two adult children, two dogs and a deaf cat. 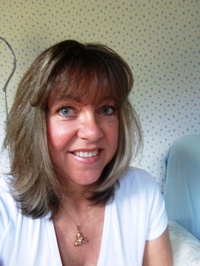