Olga has been reading Doctor Perry by Kirsten McKenzie 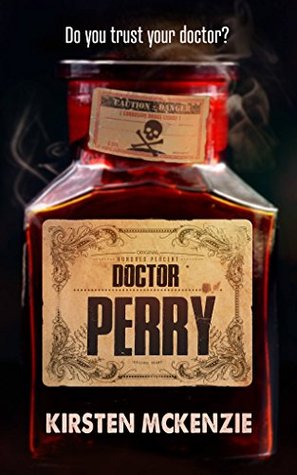 I read and reviewed Kirsten McKenzie’s book Painted a while back and thoroughly enjoyed the experience, so when I heard about her new novel, and after reading the description, I knew I should read it.

Although the topic is quite different, there are many similarities between this story and the author’s previous incursion into the horror genre. The setting is not quite as important as the old house was in Painted, but Rose Haven, the retirement home where much of the action takes place, plays a central role in the story. This home, which had previously been a motel, has not much to recommend it, other than being cheap. There are a few sympathetic members of staff, but mostly, from the director to the nursing and auxiliary staff, people are in it for what they can get, try to do as little as possible, and some are downright dangerous. Caring professionals they are not, that’s for sure. What comes across more than anything is how dehumanised and dehumanising a place it is, but there are also gothic elements to it, particularly the doctor’s lab, that seems to have come right out of Frankenstein or Doctor Jekyll and Mr Hyde. The novel also has a timeless feel, as there is talk about television and the news, but no mention of social media or modern technology, and the action is set in the recent past, or in a parallel time-frame, similar but not quite the same as our present. Even with the outdoors scenes and the many settings, the novel manages to create a sense of claustrophobia that makes readers feel uneasy as if they were also trapped and caught up in the conspiracy.

I found this novel much more plot-driven than the previous one. The cast of characters is much larger here (there is a list at the end, which is quite useful), and it is not always easy to keep them separate, as some of them don’t have major roles, and sometimes the only difference between them might be their degree of nastiness or their specific bad habits (drug use, thieving, violence…). Some characters we don’t know well enough to be able to make our minds up about, like the police officers or some of Dr Perry’s patients. There are not many truly sympathetic characters, and even those (like Elijah and Sulia) show a certain degree of moral ambiguity that makes the novel much more interesting and realistic in my opinion. The book is full of characters that show psychopathic tendencies, and its shining star is Doctor Perry. I’ll try not to reveal any spoilers, but from the cover of the book and the description, I think anybody reading the book will know who the main baddie is (as I said, he’s not alone, but he is in a league of his own). He is a fascinating character, and we learn more and more about him as we read, although there’s enough left to readers’ imagination to keep him alive in our minds for a long time. Oh, there are two other characters that are quite high up in the malevolent league, but I’ll let you discover them yourselves. (I love them!)

The author uses the same peculiar point of view she used in Painted to narrate the story. The novel is written in the third person, from the point of view of most of the characters, from the residents in the hospital to the receptionist, and of course, the doctor, while also having moments when we are told things from an outside observer’s perspective (it is not a third-person omniscient POV but it is not a third-person limited point of view either, but a combination of the two), and that increases the intrigue and adds to the novel rhythm and pacing. There is head-hopping, as a chapter can be experienced through several different characters, and I recommend paying attention to all the details, although the main characters are very distinct and their points of view easy to tell apart. The mystery, in this case, is not who the guilty party is (that is evident from the beginning) but what exactly is happening and who the next victim will be. And also, how it will all end. In case you’re wondering, and although I won’t give you any specifics, I enjoyed the ending.

There are great descriptions of places, characters’ thoughts, and their sensations (including those due to chronic illness, which are portrayed in a realistic and accurate way), and also of some of the ‘supernatural’ (I can’t be more precise not to ruin the surprise) processes that take place. There is more gore in this novel than in the previous one, and although it is not extreme, I would not recommend it to people who are hypersensitive and have a vivid imagination unless they like horror. If you can easily “feel the pain” of the characters, this could be torture.

Another fascinating novel by Kirsten McKenzie, and one that will make readers think beyond the plot to related subjects (elderly abuse, unethical behaviours by caring professionals…). Great evil characters and a very satisfying ending. I recommend it to readers of horror who enjoy a gothic touch, and to those who prefer their horror ambiguous, insidious, and disquieting.