Terry has been reading Literature® by Guillermo Stitch 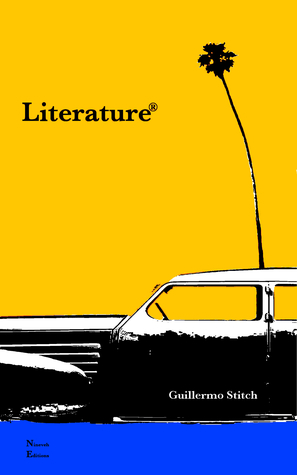 This unusual novella takes place over the course of one day, and is set during a time when literature has been made illegal, and where secret, underground networks exchange books… Billy Stringer, the hero, is caught up in one of these. It’s one of those ‘life in the day of’ scenarios, in which you find out more about Billy’s situation by way of flashbacks, including his dying-a-death relationship with girlfriend Jane, her parents’ disapproval of him, and an occasion when he got embarrassingly drunk while socialising with her colleagues.

In this strange world we’re given a hint of how the lack of reading material has affected the literacy skills of the people. Billy and Jane communicate on their ‘tabs’ ~ everyone has one, in the same way that, increasingly, people in our world are attached to their smartphones as if they are an extra limb without which they cannot function.  The way in which Billy and Jane write to each other makes ‘text speak’ or the abbreviations used on social media look like great literature.  Words are spelled phonetically, using the fewest possible letters, as if they have never been taught basic English, despite being both educated and intelligent.

It’s a curious book; the characters and atmosphere are painted cleverly and effectively.  I liked the writing style very much, with its dark humour and astute observations.  Occasionally there is a poignant reminder of the world of the past: ‘There was a reception desk that Billy supposed had been used when the building was new, a good couple of hundred years ago.  Nowadays everyone would be scanned discreetly and visitors directed via their tabs and earpieces’.

I did like it, and I realise that part of the point of it is that we don’t know ‘when’ or ‘why’, but I would have liked just a little more explanation.  I read parts of the first quarter of the book over a few times, thinking that I had missed something, and was a third of the way through before I realised that I didn’t really know exactly what was going on.  Just a little more scene setting would have made it even better, I think, and would give it a broader appeal, especially to lovers of dystopian fiction.  The blurb likens it to the ‘razor wit of Raymond Chandler’ and the ‘extraordinary vision of Philip K Dick’; I am put off by such comparisons as I think they are for the reader to decide upon, which is why I passed it by at first glance.  In this case, the story stands up well enough on its own without making such grandiose claims.

We don’t get Marlowe though. We get Billy Stringer. And Billy is on nobody’s trail.

The day hasn’t begun very well for Billy. He just messed up his first big assignment, he’s definitely going to be late for work, his girlfriend won’t get back to him and, for reasons she has something to do with, he’s dressed like a clown.

Also, he’s pretty sure someone is going to kill him today. But then, that’s an occupational hazard, when you’re a terrorist.

He’s a bookworm too, which wouldn’t be a problem–or particularly interesting–except that in Billy’s world, fiction is banned. Reading it is what makes him an outlaw.

Why? Because people need to get to work.

It’s fight or flight time for Billy and he’s made his choice. But he has to see Jane, even if it’s for the last time–to explain it all to her, before she finds out what he has become. That means staying alive for a little while.

And the odds are against him.