Judith has been reading Someone Close To Home by Alex Craigie 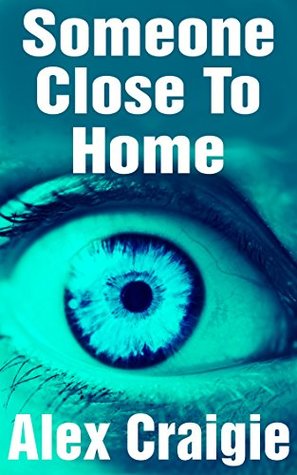 It’s been quite a while since I read a book in one go but I couldn’t put this one down. Someone Close to Home sent me through a whole range of emotions; delight, sadness, anger, joy, frustration. And this is a debut novel! The writing style of Alex Craigie is sophisticated, emotive and empathetic.

The start of the story grabbed me straightaway: the image of the protagonist, Megan, watching “each minuscule judder of the hand (of the clock)”, her immobility and her thoughts on her childhood, especially of her selfish and destructive mother who Megan loathed – still loathes, is compulsive reading. There is one sentence that foreshadows all that happens as the story continues: ‘This is all down to my mother… she’s been dead for over thirty years now and still she’s poisoning my life.”

This is a story of two halves: the time that Megan is in the badly-run care home, which lasts around six months and is told in present tense, mainly through the internal dialogue of the protagonist, and the whole of her childhood and younger life.told in past tense as flashbacks. The latter leads the reader inexorably to the point where Megan is lying helpless after suffering a stroke. She is at the mercy of mostly inattentive carers, poorly paid and resentful. Their actions, the way they carry out their tasks on Megan is described simply by her; they are tasks done to her, sometimes carefully, sometimes without heed. And then there is the carer, Annie… I’ll say no more.

The description of the protagonist’s days evoke the dreariness. The word, “waiting” is repeated so many times that I, as the reader, also waited with Megan, knowing, with some dread, that something awful will happen.

The main characters: Gideon (childhood friend and later the man she loves. Claire, her true friend in later life, Jordan, Megan’s husband, egotistical actor and a cruel man, Theo and Camilla, her greedy and selfish children), are many layered and well portrayed; their dialogue identifies them immediately. And, although there are many flat characters, in the guise of the carers and the owner of the care home, the author also gives them distinguishable voices.

The descriptions of the settings give a good sense of place. The room Megan is lying in is told in meticulous but confined detail. We see the limited view she has, and only that. (it did give me a sense of claustrophobia, I must admit.). There is “the sturdy chest of drawers topped with shapes that will become a television and some framed photographs”as “the heavy grey light” “pushes into the room” after a long sleepless night”. We hear “the rattle of trolleys” that she knows is “laden with clean and soiled bedding”, the “insistent buzzing” of room bells, the “moans, shouts and cussing from room nearby punctuated by the chivying of staff”. We feel her pain through the roughness of the care, the threat of bed sores. And the details of the places in her childhood, the  houses she lived in, countries she visited as a professional pianist, are full of evocative imagery.

It’s a plot that moves at an even pace but, ultimately, it’s also one that took me by surprise. Even closely following the actions of the characters in the story still didn’t prepare me for the ending.

Someone Close to Home by Alex Craigie is a book I thoroughly recommend to any reader.

Talented pianist Megan Youngblood has it all – fame, fortune and Gideon.

But Gideon isn’t good enough for Megan’s ambitious, manipulative mother, whose meddling has devastating repercussions for Megan and for those close to her.

Now, trapped inside her own body, she is unable to communicate her needs or fears as she faces institutional neglect in an inadequate care home.

And she faces Annie. Sadistic Annie who has reason to hate her. Damaged Annie who shouldn’t work with vulnerable people.

Just how far will Annie go?

Born in Sunderland, in the north of England, Alex has wended her way south via Eccles, Bramhall, Histon, Cambridge, Leicester and Market Harborough coming to rest thirty years ago in a peaceful village between Pembroke and Tenby in south west Wales.

She lives in an old, draughty house with stone walls 2’ thick that make any DIY a real challenge and she knows she’s really lucky to have all her children and grandchildren living close by. It’s often chaotic and noisy but these are her most treasured moments and she savours them – even if she’s reduced to an immovable heap after they’ve gone.

When not writing, reading or simply enjoying the rural life, she’s in the garden waging a war of attrition against the brambles that she encourages in the hedges for birds to nest in, vicious nettles that support a variety of butterflies, and bindweed that looks lovely but doesn’t share nicely with the other plants.

She wrote Someone Close to Home because she was angry and distressed by the institutional neglect that goes on in far too many care homes. Most of these places are so underfunded that, with the best will in the world, there simply aren’t enough staff to ensure that every resident is comfortable, contented and safe. To go from one’s home with all its memories and memorabilia to one room with barely enough space for clothes and toiletries is a recipe for depression. Throw in staff unable to come to your aid because they’re fighting a backlog of other issues, substandard food, and the occasional carer who shouldn’t be allowed near vulnerable people, and you have utter, hopeless, inescapable misery.

The novel is part romance, part suspense, part horror, part social comment. She’s failed to pigeonhole it for Amazon and would welcome and appreciate anyone’s view on the category he/she believes fits it best!

'someone isn’t just messing with his mind—they’re trying to kill him.'
'a vampire prince who goes into hiding from his own kingdom.'
DCI Galbraith is joined by a mysterious visitor from Section S—a section no one in the precinct has heard of before.
'Women who either lived around the time of the 1215 Magna Carta, or women who were affected, influenced by or made use of the clauses within the document.'
'the writing itself is as good as that of any classic American novel'.
A peer of the realm dead in his study, his body drained of blood
'an intrepid traveler gets more than her share of tabloid celebrity.'
How to Write a Book Description That Attracts Readers and Reviewers. #GuestPost from Reedsy Writer Savannah Cordova #MondayBlogs
Art Themed #HistoricalMystery LOST CHILDREN by Willa Bergman, reviewed by @lsfwrites, for Rosie’s #Bookreview Team #RBRT