Nightfall Berlin is a cold war thriller. It opens in 1972 with an assassination in the Lake District.

Next the timeline moves to 1986. Major Tom Fox, an undercover military intelligence officer, is holidaying with his family in the Caribbean. But it ends abruptly when Tom is called back to work. He’s wanted in East Berlin to bring back Sir Cecil Blackburn, a traitor who now wishes to return to the UK and face his crimes.

On the flight to Germany, Tom reads files which hint that Cecil is about to give names of high ranking people who are keeping secrets about sexual corruption. But when Tom meets Cecil, he finds a man unsure that he wants to return home. Soon Tom is compromised and he’s running for his life. Who can he trust? He must rely on his instincts and try to stay one step ahead in a dangerous game.

In a plot with plenty of twists, Tom is like a piece of flotsam in a storm filled stream. Pummelled between British Intelligence, the East German Stasi and the Russian Communists. He struggles to take a breath before being dragged back under and finally spat out, bruised and tattered.

I liked the smaller story threads as much as the main ones, especially the gymnastic elements as they have a personal interest for me. I also liked Tom’s son Charlie, who showed early signs of espionage talents, but who I also wanted to rescue from a boarding school he disliked.

The well written contrasts between east and west, for me, ticked the boxes for this genre. I easily envisioned the bleakness of East Berlin, but there were touches of humour too, which lifted the tension, just when it was needed. I would definitely recommend this to anyone who enjoys the drama of a thriller set during the cold war.

In 1986, news that East-West nuclear-arms negotiations are taking place lead many to believe the Cold War may finally be thawing.

For British intelligence officer Major Tom Fox, however, it is business as usual.

Ordered to arrange the smooth repatriation of a defector, Fox is smuggled into East Berlin. But it soon becomes clear that there is more to this than an old man wishing to return home to die – a fact cruelly confirmed when Fox’s mission is fatally compromised.

Trapped in East Berlin, hunted by an army of Stasi agents and wanted for murder by those on both sides of the Wall, Fox must somehow elude capture and get out alive.

Nightfall Berlin is a tense, atmospheric and breathtaking thriller that drops you deep into the icy heard of the Cold War.

Jack Grimwood, a.k.a Jon Courtenay Grimwood was born in Malta and christened in the upturned bell of a ship. He grew up in the Far East, Britain and Scandinavia. Apart from novels he writes for national newspapers including the Times, Telegraph, Independent and Guardian. Jon is two-time winner of the BSFA Award for Best Novel, with Felaheen, and End of the World Blues. His literary novel, The Last Banquet, as Jonathan Grimwood, was shortlisted for Le Prix Montesquieu 2015. His work is published in fifteen languages. He is married to the journalist and novelist Sam Baker. Moskva is his first thriller. 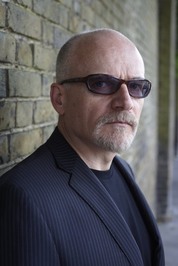