Sean has been reading A Biography of Story, A Brief History of Humanity by Trisha Nicholson 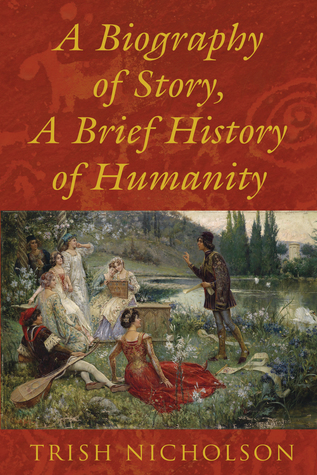 This is a unique book, and in a good way. It is an enthralling look at us, humanity and how we tell each other stories, and takes as its main character Story itself, giving her a presence that has been with us since the dawn of our species.

There are no characters as such, mainly milestones along the road of development of stories, and how deeply intertwined it is with our cultures.

The author starts naturally at the beginning. We are given a scene of an old woman, surrounded by her audience, telling us an Aboriginal story of how the buumbuul tree became such a source of food. We can imagine that this oral tradition was how vital survival knowledge and techniques were passed down throughout generations, by people who could detect regular patterns in their environment, and wanted to pass it on.

Evidence of use of controlled fire dates back 300,000 years, and we can imagine our forebears huddled around, seeking warmth shelter and a means of understanding the world.

From this point, the author uses Story to detail the unfolding of modern humanity, showing major points of interest such as when stories were first recorded, in cuneiform on the clay tablets of Sumer, notably the great Epic of Gilgamesh (which the author does a neat job of summarising), then to the development of the fable, where animals have much knowledge and wisdom to impart to their equal partners in the world, humans.

The pace of Story picks up in tandem with the growing modernisation of the world. In Story’s company, we cross deserts and icy North seas. We hear Bedouin love stories, find out how Scheherazade saved her life and gave us 1001 Nights, and set out the foundation for Marvel comics as Snorri Sturluson gathers up the old Norse sagas and breathes life into the old gods.

How Story was used for political and religious gain is clearly shown, as we see Irish Celtic monks converting Celtic gods and heroes into Christian saints – to be fair, they were not the only culprits.

The author skilfully leads us through the emergence of printing, with interesting anecdotes and references, and the explosion as printers such as Caxton begin to print in the vernacular, and broadsheets are used to make political points.

It is not just Western developments that are covered. We are given an excellent summary of the Ramayana, written by Valmiki in around 400 BC. We jump continents from the woodcut block printing of China, to the emergence of Islam (initially open-minded and science-orientated, then succumbing to a more narrow view of the Prophet’s teachings), and eventually to the Crusades, where two cultures collided.

Story is not just told by the men. The formidable Marguerite of Navarre is profiled, and a mention is made of Aphra Behn, reputedly the first Englishwoman to earn a living from writing in the 1670’s.

However, we are now in the age of exploration and conquest, giving rise to the novel and the historical novel, epitomised by the writings of men such as Walter Scott and James Fenimore Cooper.

Finally, although Story won’t ever end, we sweep through the industrial and other revolutions, to catch up with the present, digitalised day.

I found this book to be a joy to read. It is historical, and a lot of it will be familiar to anyone who is interested in history, but it gives a unique perspective, doesn’t drown the reader in superfluous facts, and reinforces how important telling each other stories is, how much a part of our DNA it is, and why books are so important. There are many, many familiar names, but also some new ones, and hopefully you will find out things that you may not have known before. Isn’t that the point of a story??

Through Rosie Amber’s Book Review Team, I received a free copy of this book from the author, in return for an objective and unbiased review.

Trish Nicholson brings us a unique interweaving of literature and history seen through the eyes of storytellers, making a fascinating journey for general readers and students alike. From tales of the Bedouin, to Homer, Aesop and Valmiki, and from Celtic bards and Icelandic skalds to Chaucer, Rabelais, Shakespeare, Scott and Chekhov, some of the many storytellers featured will be familiar to you; others from Africa, Asia and the Pacific may be fresh discoveries.

Beginning with oral tales of our foraging ancestors, the emergence of writing, the great migrations, the age of exploration and the invention of printing through to the industrial revolution and the digital age, Nicholson brings us voices from all corners of the world. Combining this extraordinary breadth with telling myths, epics, fables, fairy tales and legends, she reveals their story-power in the comedy and tragedy of human affairs. And what of Story’s future..?

A Biography of Story, A Brief History of Humanity is our own human epic, thoroughly researched and referenced, and told with the imaginative flair of an accomplished storyteller. This is a book-lover’s book, illustrated and handsomely presented in hardback and paperback volumes designed ‘to have and to hold’.

4 thoughts on “A Biography of Story, A Brief History of Humanity by @TrishaNicholson #TuesdayBookBlog”

'Small Forgotten Moments is the story of Jo Mckye, an emerging artist celebrating her debut exhibition. But her fictional subject, Zenna, has become an obsession. We see Zenna infiltrating every part of Jo's life and her unconscious as Jo increasingly struggles with telling the real from the fictional. She is driven to return to her childhood home and learn about her past in an effort to understand Zenna's origins, and try to rid herself from this malevolent influence.'
Yellow orange flowers 💐 not quite sure of their name. Anyone have a suggestion? #yellowflowers #orangeflowers #gardenflowers #urbangarden #countrygarden #hampshiregarden #lovegardens
Drag, Songs, Friends, Laughs, Lies, Danger & Redemption - a story set in a gay bar in Magawatta, Indiana.
'A biography of the life and works of the man who created Middle Earth.'
New Tasty Good Reads! Books and Cheese from Fromage and Fiction in conjunction with Cheese Cuisine. @cheesecuisine @fromageandfiction
'A close-knit group of friends set off on a hike in the remote, mountainous Tsitsikamma region of South Africa. Three couples, one father and his daughter. From the beginning there are problems; one person falls ill, and another takes no notice of the rangers' weather warnings, leaving them stranded in various locations.'
When you are on day 12 of isolation because you have two family cases overlapping, surprise flowers from a friend mean the world! #surprisedelivery #friendship #friendsmeaneverything
A little treat for myself. Bought from https://moteefe.com/store/garden-lovers
#NewRelease Historical fiction set in a small coastal village near St. Ives in Cornwall.