Alison has been reading Good Vibrations by Margaret Halliday 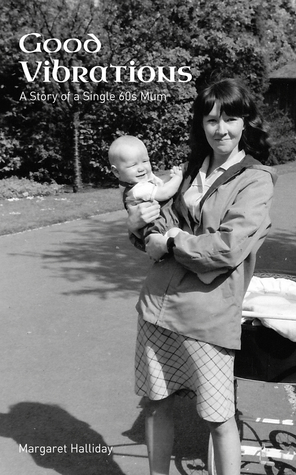 Good Vibrations – A Story of a Single 60s Mum

Margaret’s story makes for a very interesting read and offers a real insight into how things were for young woman in the sixties.

She’s an intelligent girl, with a bright future, but she finds herself pregnant. With a supportive sister, she has somewhere to turn when she has to leave college and give up her dreams of a future in horticulture. But the baby’s father doesn’t want to know, and Margaret still wants the chance of a career, so she decides to give her baby up for adoption.

After the birth however, she has a change of heart, and the remainder of the book charts her struggle to provide for herself and her son, through a series of dodgy housekeeper positions, refuges and housemates.

Margaret’s bravery and determination to fend for herself come through really well and you’re rooting for her even when you’re willing her not to make the wrong decisions. The story really shows how difficult and dangerous it was for a single mother back then.

This has the potential to be such a great book. Margaret has a lovely voice, funny, clever and honest, but there isn’t enough detail here, and the text really needs a bit of reorganisation. There are some fabulous characters that need developing further. With some restructuring this would be so good, a really brave and important book. But it’s a little patchy at the moment. Well worth a read though.

Margaret Halliday’s second book, Good Vibrations: a Story of a Single 60s Mum tells the poignant tale of her harrowing and often hilarious experience of unmarried motherhood in pre-Abortion Act Scotland. 17-year-old Margaret’s Glaswegian romance results in unplanned pregnancy and heartbreak but she battles on overcoming all obstacles which will make you laugh, cry and sometimes scream.