Anita has been reading The Puppet Master by Abigail Osborne 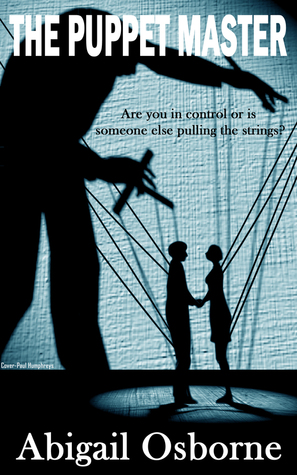 I thoroughly enjoyed reading The Puppet Master, despite the sometimes-harrowing content that made it an emotional roller coaster!

Right from the beginning, I empathised with Billie, the sad and traumatised leading lady. I wanted to know why she was so terrified of being found, and who by.

When Adam, the newspaper reporter enters the story, determined to expose Billie for something she was supposed to have done, the tension as he tries to break down her defences is heart-breaking. Gradually, he peels back her protective layers, exposing the raw emotions that hid underneath her fear.

I kept hoping Adam would change his mind when his feelings for her began to grow, and take pity on someone who has already suffered enough, but his need for justice seemed too strong.

There is an unpleasant element to this story, but it is handled with great care by the author. By the time I had finished reading the second part of the book, I was desperate for some happiness for Billie. All the signs were there, but I knew it couldn’t happen, not yet.

Watching Adam when he finally learns the truth about Billie was almost as painful as the lie he originally believed.

The last part of this book piled on the tension yet again, and I geared myself up for a gripping ending. But the ending totally caught me by surprise.  It made my blood run cold!

A very absorbing well-written plot, the evil winds its way throughout everything, strangling and contaminating everything in its path…

Manipulated by fear and love…could you cut the strings and take back control?

Billie’s hiding from the world, believing it to be the only way to take control of her life as she lives in fear of the man who nearly destroyed her. But what she doesn’t realise is that she’s exactly where he wants her; isolated and afraid. A chance meeting with budding journalist Adam sparks a relationship that could free her from the terror that controls her. But will Adam be able to see the real Billie buried under her terror and pain?

Adam knows exactly who Billie is and is determined to expose her and get justice for the lives she ruined. But first, he needs to convince her to open up to him but as unwanted attraction and feelings blossom between them, Adam is forced to realise that all is not as it seems.

Most of their lives have been unknowingly governed by the desires and needs of someone who considers himself their master. He has influenced and shaped them for years, meticulously weaving a web of lies and control around them. Can Billie and Adam survive the betrayals in store and cut the strings that bind them?

One thing is for sure. The master wants his puppets back – and he’ll do anything to keep them.