Karen has been reading Seekers by R.A. Denny 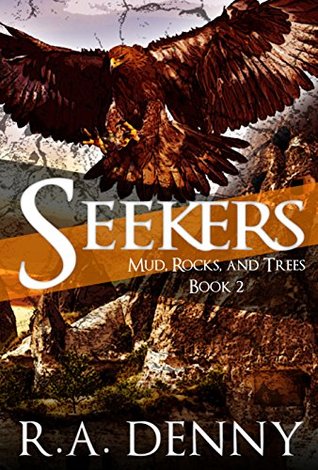 In this second book you meet again with Baskrod, the three young people who have to fulfill the prophecy, and the cat rider. As the story continues, there is even more danger for them to face.

With Seekers, R. A. Denny has created the second book of a captivating, sometimes a little gory story with plot lines for Amanki, Moshoi, Brina, and Metlan. As the first book introduced the main characters and the circumstances pretty well, I go into the story right away, already familiar with the different characters and their plot lines. The characters are well elaborated; you can see them grow with their tasks. R. A. Denny created a quite intriguing adventure with individual plot lines which are getting closer on a steady basis. The story has a good flow that carries you through.

This is a book for you if you like young adult fantasy series, intriguing suspense, believable characters, and young heroes-to-be on a quest.

“Bring the seals together in Tzoladia and you will learn their secrets.” An intriguing, yet simple quest. But nothing is ever that easy.

Brina is proficient in archery. Moshoi skillfully wields the swords he crafts. Amanki has mastered sailing. But those skills aren’t enough. The three young adventurers must make choices. Choices that mean life or death. Choices with no safe answer.

The Society of the Word has given them tools: wise sayings, moral stories, mysterious prophecies. But their faith will be tested. Will the star guide them to their destiny or lead them to their doom? Who will survive?

R.A. Denny is an ancient history buff with a law degree from Duke University. While working as a criminal prosecutor by day, she escaped by night to create the fantasy world of her Mud, Rocks, and Trees series.
R.A. Denny loves adventure, animals and history. She has travelled to the ancient rock city of Petra on horseback, flown through the jungles of Costa Rica on zip lines and visited the Great Pyramid on a camel. She lives in Delaware. As a child, she had two pet flying squirrels.

One thought on “Rosie’s #Bookreview Team #RBRT #YA #Scifi Seekers by R.A Denny”