Lilyn has been reading The Afters by Christopher O’Connell 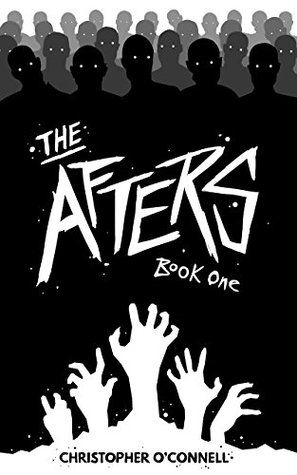 I received The Afters by Christopher O’Connell for review consideration as part of Rosie’s Book Review Team. It was the cover of the book that initially drew me too it. I think it made me expect something vaguely comic book-y, without the whole panels thing. And, actually, that was pretty much dead on. The Afters has that quick-moving action and sly-tongued banter that graphic novels have trained me to expect.

O’Connell did good with The Afters. It’s 234 pages, but feels like its only about 125 or so. The main character, Chuck, is too mouthy for his own good, but he has a heart of gold, and when he suddenly finds himself taking care of a couple of munchkins, he’s surprisingly okay with it. And you buy it. That’s the most important part. He seems very believable. We want to think that, should the worst happen to us – to the world – there’d be a slew of Chucks out there doing the right thing. I didn’t even mind being inside his head, and I normally hate that POV! As for Kalila – she wasn’t my favorite. To be honest, I could have done with most of her parts being much reduced in the novel. Chuck, Big Bertha, and the two little ‘uns were enough for me.

The Afters does one thing different from normal zombie novels that really made me feel creeped out for a few minutes. I won’t go into details because you need to read it yourself, but let’s just say that I’m not sure I could do the apocalypse in The Afters’ world.  Well, maybe if I got to be like one of the kids…. actually, no. Not even then. Not considering some of the baddies that get introduced en masse later in the book. Nope, no thank you. I want a regular zombie apocalypse please.

This was a quick, easy read, but it would have done much better with a(nother?) round with an editor. There are some scenes that could have been tightened up and it would read much better on the whole. One stands out near the beginning where the dialogue just feels kind of cringe-worthy.

Overall, The Afters was an enjoyable, shut-your-brain off read that demanded little, but entertained a lot. It’s not memorable, but you’re absorbed while you’re reading it. Considering it was a post-apocalyptic zombie fic, which I’m nearly burnt out on, AND the POV is my least favorite, I could have easily hated this book. I didn’t, though, and I think that says a lot for O’Connell’s story-telling ability.

It’s the end of the world as we know it and Charles Gilbert Billingsworth the VIII feels just fine. Not only is he surviving the zombie apocalypse, he’s enjoying it too. But Charlie’s idyllic life as a daydreaming zombie killer takes a turn when he finds two kids lost in the woods. One of whom is hiding an amazing, powerful secret.

Meanwhile, Kalila Trout is on a quest for revenge. The only survivor of an attack by the warlord known as King George, Kalila’s vengeance is only stopped by his distinct advantage in numbers. When King George kidnaps one of Charlie’s children, Kalila finds an unlikely ally to help her get the closure she needs. But even if Kalila and Charlie manage to make it out alive, a new race of zombie might ruin everything they are fighting for.