Terry has been reading Assaulted Souls by William Blackwell 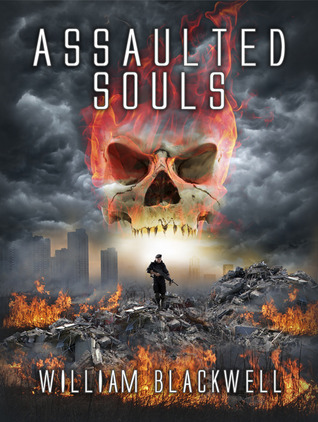 This first instalment of the Assaulted Souls series is a short novel (possibly a novella) of just 183 pages.  The setting is an alternative reality ~ the year 2016, three months after a nuclear blast.  The story opens with Nathan King – who has lost his memory due to a fall from a balcony – waking up in a cave with a man he doesn’t recognise and no recollection about how he got there.  Great opening.  We soon find out that the cave is on Prince Edward Island, which I assume to be off the coast of Canada, and Nathan begins to piece facts together via information from the stranger (Edward) and his own still hazy memory.

This opening to the series has a lot going for it; there is some excellent, amusing dialogue (both spoken and inner), and the setting descriptions totally worked; I could imagine every scene.  It rips along, and I found each character to be clearly defined from the outset.  Mr Blackwell can certainly write, and this is one of my favourite genres.

However, much though I enjoyed the author’s writing style and humour, I feel that the book needs more work ~ careful redrafting, the fine-tuning of ungrammatical sentences, and more attention to structure.  The backstory of some important issues, such as Nathan’s amnesia and the nuclear blast itself, are brushed off in the odd short paragraph (some of which read like notes that were written with the intention of expanding them in a later draft), whereas a story about some trouble with a difficult tenant in Nathan’s past life was more detailed than necessary for such short book, and not particularly relevant; the tenant does appear later on, but is in and out within a couple of pages.  Mr Blackwell is clearly imaginative, articulate and can write some captivating sentences (which is much of what writing a good book is all about), but there were too many that made me go ‘ouch’. At first I was highlighting passages and making the note ‘ill-thought out sentence’.  As I found myself highlighting more and more, I shortened it to ‘ITOS’.  Then I gave up.   A few examples:

There are run-on sentences (two independent clauses without an appropriate punctuation mark or conjunction to separate them) and non-sentences such as this: Suddenly banging and growling at the door.

To sum up, the basics are all there, but in my opinion it needs fleshing out, more re-drafting and the help of a good copy editor for it to stand up as the good example of this genre that it could be.

Nathan King wakes up one day freezing cold and starving with hunger on a tattered mattress in a dark cave and has no idea where or who he is.

He meets Edward Sole, apparently his protector for the last few months, who tells him a nuclear bomb has been dropped and most, if not all of the world, has been destroyed.

Slowly the realization sinks in that in this horrific post-apocalyptic landscape, there are no rules, no laws. Cannibalism is rampant, mutant animals and humans are on the attack.

With all communication cut off, and meagre supplies, every day becomes a fight for survival and sanity!

To make matters worse, a band of savages called The Neanderthals have emerged who rape, pillage and murder for more than just survival. They enjoy it.

Fighting for their survival and hoping to find a more hospitable island off the coast of Prince Edward Island, Ed and Nathan team up with Cadence Whitaker, Nathan’s girlfriend whom he has no recollection of, and fierce warrior Velvet Jones to try and hatch a plan to escape the island before they’re all killed.

In the meantime, Ed has begun a slow descent into madness, leaving the group wondering who the enemy really is.

A lightning-paced, action-packed exploration of a terrifying existence in a wasteland produced by mankind’s stupidity.