Barb has been reading Shrouds Of Darkness by Brock Deskins 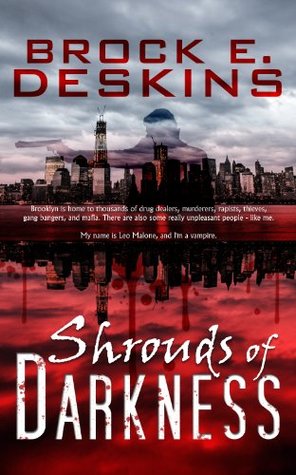 My Review: 3.5 out of 5 stars for Shrouds of Darkness by Brock E. Deskins

“Don’t be too sure I’m as crooked as I’m supposed to be. That sort of reputation might be good business, bringing high price jobs and making it easier to deal with the enemy.”—Sam Spade (Humphrey Bogart in The Maltese Falcon, 1942 based on Dashiell Hammett’s 1929 novel)

Leo Malone is a private investigator, a knight in dubiously-rusty armor who is ten times as antisocial and unfriendly as his hardboiled detective models—and a lot more dead, or at least undead. Told mostly in the first person from Leo’s POV, we soon realize his private eye monologue about how detached he is and how little he cares about people doesn’t exactly match up to his actions. When we meet him, in fact, the first two items on his to-do list are to stop an abusive father and a rapist. But just in case we miss that point, Leo muses, “It’s possible, and this is a stretch, the pretense is me not giving a shit. Maybe I am pretending to be a heartless bastard so I can go on doing what I do without becoming a complete basket case.”

Author Brock E. Deskins goes on to check off most of the remaining hardboiled detective tropes:

Although this book got off to a slow start with a fairly massive info dump about the flavor of vampires and werewolves in Leo’s world, it did pick up with plenty of fast-paced and bloody action, accompanied by lots of suitably snarky observations from Leo. I just had a few problems with some of it. For one thing, there was the racism. Some of Leo’s comments about “squints” (Asians) he attempts to dismiss by playing the age card, claiming that’s what they called them when he was growing up. But he clearly knows better, and in fact refers to the rapist he stops as “black” (instead of the term we all know he would have heard those eighty years past)—although, he doesn’t ever bother to name the races of (presumably) white characters. Women seem to fall into the angel or whore categories, usually by haircolor. In fact, the vampiress who turns him has black hair, while the golden-haired Katherine is a smart and beautiful and willing to sleep with him without any of that annoying wooing or foreplay.

But for me, the missing pieces that usually make all this genre-mashing palatable are humor and a little humility. If the protagonist isn’t just so unstoppably able to defeat every single threat with literally superhuman acts of strength, I might legitimately feel more tension over the outcome. And if there’s a sense that everyone tacitly accepts their whole preposterous world is built on the fluffiest of fantasy, and is thus willing to laugh at themselves and their situations, the reader is so much more likely to willingly suspend disbelief and go along with the fun. At least, this reader is.

Still, if you’re looking for a fast-paced action story with plenty of blood, a clever plot, standard tropes, and comfortably-familiar characters, then Shrouds of Darkness might be for you.  It’s certainly those features which will have me round up my three and a half star rating to four stars for online reviews.

Leo Malone: Vampire, body guard, Private detective, and all around pain in the ass is hired to find a client’s father who has gone missing, but not only is the missing man an accountant for the mob, he is a full-blooded werewolf.
What seems to be a simple case of a werewolf run amok turns into a massive conspiracy that threatens to reveal the existence of both species as the brutally dismembered bodies of humans begin turning up all around Brooklyn.
Leo quickly finds himself embroiled in fights between werewolves, vampires, the mafia, and the local police. Luckily, violence is what Leo knows best.