Terry has been reading Restitution by Rose Edmunds 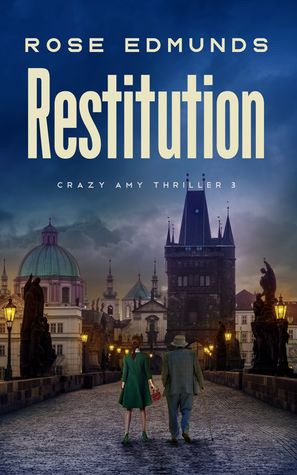 In this third book in the Crazy Amy series, Amy travels to Prague to help 84 year old George Smithies recover a Picasso painting last seen in 1939, and help him find his way through the maze of Czech art restitution law.  The situation is a complex one, as there is mystery surrounding family ties, and right of ownership is not straightforward.  Amy and George meet up with Beresford, an art historian to whom Amy takes an immediate dislike, and her old ‘frenemy’, Mel.  It soon transpires that Amy and George are not the only ones interested in the painting, which puts Amy in great danger.

The amount of research that has gone into this book is evident, with much about the history and culture of the Czech Republic that I found most interesting; I like novels that teach me about other countries.

Amy is oddly likable, even though she shouldn’t be; she’s snobbish and judgemental with a hell of a chip on her shoulder (and I couldn’t forgive her for dragging poor, reluctant George out for a walk on their first night in freezing cold Prague!), but there’s something about the way she’s so honest about herself that makes her endearing.  Her emotional dilemmas, even just the seemingly trivial ones like whether or not she ought to sleep with a man who attracts her and how to get rid of the excess five pounds around her middle, make her seem very real.

Though maybe not always so self-aware: ‘ “..Amy, did anyone ever suggest you might have a problem with alcohol?”  “Yes”, I snapped, “the idiots at the Priory”.’    I love that!  Her bitchy-aside-a-minute relationship with chavvy gold digger Mel is beautifully illustrated in its oneupmanship; I think observation about people’s motivations and insecurities is a real strength of this author, and I’d love to see more of it in future books.

Still battling through the difficulties caused by her psychological problems, Amy makes some candid statements: ‘Everyone pretends there’s no stigma against mental health issues, like everyone pretends there’s no sexism or racism.  But it’s still bubbling away beneath the surface and … people will find a cogent, lawful reason for denying me a job … That’s the way it is’

I liked that this novel was less overtly fast-paced than the previous one, with more ‘downtime’.  It’s cleverly structured, and I’m sure it will be appreciated by readers who like to immerse themselves in thrillers with complicated plots, and anyone with an interest in said plot’s subject matter, ie, the restitution of valuable works of art.

Reeling from a catalogue of disasters, flaky sleuth Amy travels to Prague to help an old man recover a Picasso painting last seen in 1939. It seems like a mundane assignment, but the stakes are far higher than Amy imagines. Competing forces have vested interests, and are prepared to kill to meet their goals. Caught amid a tangle of lies, with her credibility in question and her life on the line, could Amy’s craziness be her salvation…?

For more than 20 years, Rose Edmunds almost passed as normal, working undercover in in several well-known financial firms in London while quietly gathering material for her novels.

Since jumping off the corporate hamster wheel Rose now writes thrillers with a strong ethical theme. Her writing draws heavily on her considerable insight into business world and in particular the uncomfortable conflict between capitalism and humanity.

Rose’s debut thriller, Never Say Sorry, was about a Big Pharma conspiracy to suppress a cancer cure. Since then, she has been working on the Crazy Amy thriller series—an ambitious project which will follow the brilliant but unstable Amy Robinson on her journey from senior finance executive to who knows where… 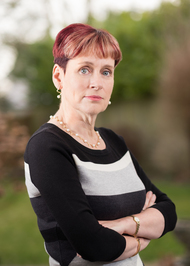