Sean has been reading Broken Branches by Ben Ellis 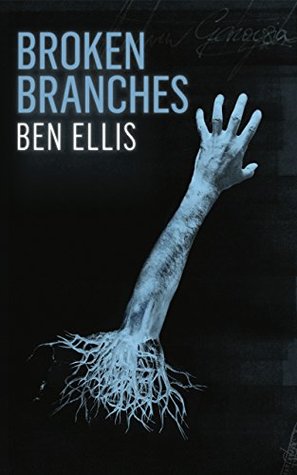 This is a quirky future dystopia, where the controlling powers seem to be muddling through in a very British way. They are not boots-to-the-throat controlling, but want stuff done with a minimum of fuss. It is eugenics for the future, with all of the selective breeding, incarceration and enforced sterilisation of “unfit” people. Broken Branches are not allowed to procreate, but there is a “work-around” application process. However, the prevailing sentiment seems to be “You mix champagne with dishwater, you still have sh***y dishwater”. All sorts of National Front, Aryan, etc. overtones going on.

For me personally, not an inviting future! Most men are sterile, for reasons which are outlined much later in the book. It is a class-driven society, between thoroughbreds on the one hand, and mutts/half-breeds/broken branches/whatever you want to call them on the other. Broken branches are those who have no genetic family history, so cannot take their place on the Family Tree.

The State is fixated on the genetic purity of the National Family Tree, so Thoroughbreds are allowed procreate once they receive approval, the others not. However, there seems to be some level of “inter-breeding” allowed. The genetic status of each potential parent is set out on the application form, and a majority of a randomly-selected jury of 40 “peers” [thoroughbreds] must approve each application.

This story is about two couples who slip through the net, having genetically advanced babies, and their journey.

Tom Webb: Husband of Grace, he’s a thoroughbred. Nice guy, grown-up attitude to life, very supportive and defensive of is wife, and always looking to reassure her.

Grace Webb: Wife to Tom, a broken branch. No self-confidence, thinks Tom is with her due to an “undiscovered genetic defect”. Extremely paranoid about being exposed as a broken branch.

Charlie Falkland: Grace’s twin brother. Lad-about-town, a player with a relatively short fuse, and completely self-absorbed for about two-thirds of the book.

Head of Genetic Integrity: Sinister governmental figure looking to enhance his own reputation through using the babies as lab rats.

Shears: Leader of the Gardeners, a domestic terrorist organisation dedicated to “rooting out the broken branches” who would dare try to propagate. The Gardeners are the “pruners for the pure”.

Gregory Rock: Anna’s dad. Appalled she is pregnant by a broken branch. A bit naïve.

Maiya Lanka: Charlie’s sometime ex, who gets cheated on. Later, she becomes some type of earth-mother figure (rhymes with Gaia??) figure.

We initially follow Tom and Grace, as they apply to become parents. They run a Gardener mob gauntlet to get to the relevant Ministry, seeing a broken branch being horrifically mutilated on the way, which causes severe trepidation in Grace.

In this case, the drugs DO work, and Grace becomes pregnant. The news is inadvertently broken at a family dinner, attended by Charlie and Maiya. Maiya is secretly upset, as she wanted to become a mother also, but her status as a broken branch kills that hope, She robs a couple of fertility tablets (hilariously named Go!Nads!}, and slips them into Charlie’s drink.

Charlie ends up finding and sleeping with Anna, a thoroughbred out on a hen night, and not knowing he’s on the ‘Nads he gets her pregnant. Dad is suitably not impressed.

The couples and unborn babies then become the subject of a search, from the deranged Gardeners who want to kill them, to Head who wants to analyse them, to William Lanne who wants to protect them, the background being a society’s descent into chaos as broken branches agitate to become part of the Tree (with accompanying benefits), and government scrambles to contain the movement.

I’d give it a three star.

I think the author is not quite sure of his audience, or how he wants to book to be read.

Audience-wise, it’s hardly YA with the level of language the “alternative character” uses, yet it’s a bit too light on the thriller/world building for a fully-engaged adult reader.

Angle-wise, it has a light and easy tone, with some almost comedic moments in it (e.g. Charlie taking on the super-enhanced security guard in the helicopter). It has great potential and, with the amount of real history and human experience to draw on, I think the author could get to a deeper level with this story.

Thanks to the author for giving me a free copy in return for an honest review.

All men are sterile. Fertility drugs are given only to couples whose genetic matches are approved. Those without a family history to prove their genetic heritage are outcast from society.

Grace is a broken branch. As an orphan, she has no link to The National Family Tree, so she and her husband, Tom, are ecstatic when they’re approved to have a baby. But that was the easy part. Grace’s twin brother inadvertently gets a girl pregnant after a one-night stand, and his girlfriend isn’t happy because it should’ve been her. Both sets of parents soon become the target of a violent terrorist group that advocates genetic purity. To make matters worse, there’s something strange about the unborn children that’s attracting government attention.