Terry has been reading The Usurper’s King by Zeb Haradon 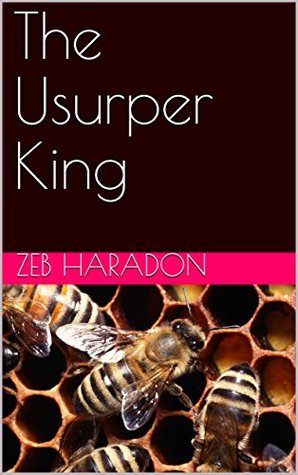 I chose this book from the review team submissions list because I liked the idea: an alternative present, in which the crimes of Ted Bundy have not been discovered, and he is now running for president, as a Republican.  Senator Bundy is facist, sexist, you-name-it-ist, and pro-guns; in this alternative reality, active shooters (who number amongst his supporters) are a force to be reckoned with on a day-to-day basis, rather than an occasional horror.

I did not know what to expect when I opened the book; it has an unremarkable cover (an Amazon standard?), few reviews and low rankings, but I’m happy to report that, as far as my review blog goes, never has the phrase ‘don’t judge a book etc’ been more apt.  Zeb Haradon is a terrific writer with a real story-telling spark that’s superbly dry, witty and world-weary, and his humour is absolutely up my street.  The book is clever, unusual, touching, funny and in parts made me laugh out loud, a rare occurrence; I was heard to mutter ‘Brilliant!’ in a couple of places.  I read it in 48 hours.

The Usurper King is told from the first person point of view of Jim Galesh, a 40 year old guy who has always struggled to find his place in the world.  He has a broken marriage, a drink problem, and suffers from a disease called TAP: Technologically Acquired Progeria.  This was acquired via ‘some sociopathic prankster who decided to write the first hybrid biological/computer virus’.  Basically, he is ageing much more quickly than he should be (and the stuff about his time working in computer journalism, where he got this disease, is hilarious).

Jim is on the way to winning big money when he stars on the game show Guts!, on which contestants practice extispicy ~ predicting the future by studying animal entrails.  Via the show he meets super-intelligent hillbilly Nick, who introduces him to the idea that Bundy is a serial killer, and that many of the murders attributed to the Green River Killer were actually committed by Bundy.

One of the high spots was discovering, half way through, the identity of ‘JW’, Bundy’s Democratic rival, which explained some things like Chicago’s high murder rate ~ it was dropped in so smoothly.  Elsewhere, some of the parts I loved best were those about Jim’s family: his son Reg, who he adores, and neurotic ex-wife Agatha and her control freak family.  There are a wonderful few pages about his in-laws:

“Do you remember Clippy?  That’s the cartoon paper clip in Microsoft from the late 1990s.  You would open a new document and start writing and it would just up and force itself into your writing and say “it looks like you’re writing a letter” and try to offer these unhelpful writing tips while you look for the X button to shut it down.. I think they call it Office Assistant…. anyway, Agatha’s mother was like a cross between Clippy and Nurse Ratched… then there was her father.  As you might imagine, the years with Clippy Ratched have left him a shell of a human.”

Often, it was just the day-to-day observations that I loved the most, or odd sentences; I highlighted so many.

“They had the kind of faces you see in an illustrated dictionary next to the definition of the word ‘loser’.”

“Some other dork trying to look like a thug came in carrying a baseball bat.  ‘I understand you don’t want to co-operate.  I’m the guy they bring in to help people co-operate.  They call me Mr Co-operation’.”

Nick:  “You got a phone?  I mean one of them fancy ones with the internet on.”

When Jim goes to a doctor to try and get more of the medicine that helps him cut down drinking, the doctor is reluctant to give it, and tries to steer him, instead, towards the Twelve Steps: “The only criticism of it I read came from these AA lunkheads and websites for rehabs who stood to lose a bundle if people found something that actually worked.”

I’m giving this 4.5* because there are a fair few proofreading errors (missing vocative commas, argh!), particularly in one section around the middle that wasn’t as well put together as the rest of the book (it’s when Jim is trying to get Bundy looked into), to the extent that I wondered if it had been written in a hurry, an afterthought, but I’ll still round that 4.5* up to 5* on Amazon, because it really is a great book.  Another proofread, a bit of a tidying up in places, and it would be outstanding.  I recommend it wholeheartedly to anyone who likes clever observational humour of the dry American kind.  The end is totally, totally unexpected, by the way.

Whether or not some of it is a comment on the current political situation in the US, I really couldn’t say.

“…like the old British class system, where mediocre people get special privileges because they were born into wealth.  But it does seem there is a natural aristocracy – one which comes from intelligence, acquired ability, self-education, a natural curiosity about the world, an independence of thought, or maybe just a vigor for life – and which cleaves society into the winners and the losers.  The losers, finding themselves impotent in mastering the art of life, are naturally going to be envious and bitter, and voting for Bundy was their revenge against the world.”

'It's healthy to have an enemy. It brings people together.' Terry reviews #dystopia Cromby's Axiom by Gary J Kirchner.
Getting ready to make a persimmon, pomegranate and apple 🍎 crumble with my fruits from @oddboxldn #oddisgood❤️ #fruitcrumble #freshfruit #homecookingisthebest #homecooking
Yellow and white so pretty. Snow melting off of the heathland gorse.
'#SelfHelp advice about taking back control of your life.'
'A woman with a long reach from the grave'. Rosie's #Bookreview of #Paranormal Tale The Grimy And The Greedy by Meaghan Curley.
One more photo from my walk after the snowfall.
'Pendragon (Pen) Devon is sent to stay with his uncle in a remote Scottish castle after pushing a school bully into a lake. Even though Pen was sitting in the library at the time, this was the first example of The Rite appearing in Pen.'
'She's Britain’s best-loved psychic'.
Just the snow and the wildlife were in the garden last evening. No hiding where the fox went today.