Robbie has been reading Talon, Come Fly With Me by Gigi Smedlmayer 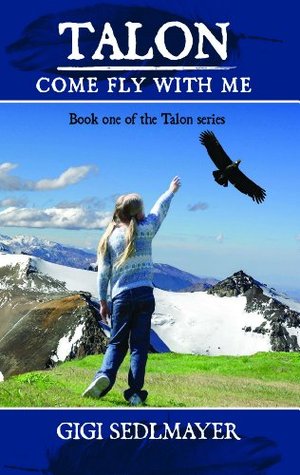 Michael and I really loved this book. It is a story about a young girl, Matica, the daughter of a missionary living in a remote village in Peru. Matica suffers from a growing disability and is teased and ostracized by the local Indians as a result. Matica is lonely and she makes friends with a giant condor, Tamo, and his female partner, Tima. The condors are intelligent birds and are able to form a relationship with the little girl. My son, Michael, also suffers from a chronic condition and he was very sympathetic to Matica’s disability.

When Tamo and Tima’s egg is threatened to be stolen by poachers, Matica and her father must help them to save their egg and keep it safe until it hatches. The story conveys an excellent message about the danger to wildlife conservation programs posed by poachers and their unscrupulous methods. The poachers resort to shooting wildly at Tamo when he attempts to save his egg by attaching them.

The book provides some interesting insights into life for a Western family in the village of Pucara which is not at all sophisticated and is lacking in all technology and modern aids. It teaches children subtlety about persevering to overcome obstacles, acceptance of difference, respect for nature and wildlife and also about love and developing relationships with, and having respect for, other creatures.

Michael liked this book so much we already have the next book in the series. I would really recommend Talon, come fly with me to children aged 9 to 13 years old. My rating for this book is five out of five stars.

Nine year old Matica lives in a remote village on a dry plateau in the Andes of Peru. She moved to Peru when she was five with Australian missionary and schoolteacher parents. Because Matica is trapped in the body of a two year old, her growth handicap has caused her to be rejected by the local people and they would not accept her into their community or allow her to play with the children.

With patience and a sense of adventure Matica befriends a pair of condors. A strong bond and love develops between them.

Matica rescues the egg the condors, Tamo and Tima, are trying to protect from poachers and nurtures it to hatching. The egg hatches on her 10th birthday and she names the new fledging Talon.

Many adventures unfold, including her finally being accepted into the local community. And something totally unexpected…

This is the beginning of many incredible adventures with Talon and Matica. It is a story of hope, determination and love.