Olga has been reading Freaky Franky by William Balckwell 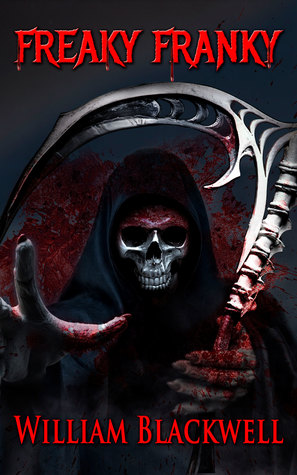 I have been reading a book called Paperbacks from Hell  and when I saw this book, it reminded me so much of many of the covers and topics I had been reading about that I could not resist, although I was not sure about the title (was it horror, humour, or something else entirely?).

The novel begins with quite a bang. A strong scene where we are introduced to la Santa Muerte (Saint Death) a religion/cult (depending on whose point of view you take) that has flourished in Mexico and is spreading to many other places. Although we all have heard about the Mexican Día de los Muertos, this might cover new ground for many of us, but the author is well informed and provides good background into the history and the various opinions on Saint Death, that is an interesting topic in its own right.

But don’t get me wrong. This book is not all tell and not show. We have a number of characters who are linked (unknowingly at first) by their devotion to Saint Death. What in the beginning seem to be separate episodes, which show us the best and the worst consequences of praying to Saint Death, later come together in an accomplished narrative arc. Whilst praying for health and good things can result in miracles, praying for revenge and death carries serious and deadly consequences.

The story, written in the third person, alternates the points of views most of the characters, from the main characters to some of the bit actors, good and bad (although that is pretty relative in this novel) and it moves at good pace. It is dynamic and full of action, and this is a novel where the plot dominates. The characters are not drawn in a lot of detail and I did not find them as cohesive and compelling as the story, in part, perhaps, because they are, at times, under the control of Saint Death (but this is not a standard story of satanic possession). Although none of the characters are morally irreproachable,  Anisa and Dr. Ricardo are more sympathetic and easier to root for. Yes, Anisa might resent her missed opportunities and the fact that she is stuck in Prince Edward Island looking after her son, but she goes out of her way to help her friend Helen and her brother Franklin and warns them not to pray for revenge. Dr. Ricardo threads a fine line between helping others and protecting himself, but he does the best he can. Franklin, the Freaky Franky of the title, is a much more negative character and pretty creepy, especially early in the novel. Although we learn about his past and the tragedies in his life, he is Anisa’s brother, and she’s also gone through the same losses, without behaving like he does. He uses Saint Death’s power mostly for evil, although he seems to change his mind and attitude after Anisa’s intervention (I was not totally convinced by this turn of events). I found Natalie, the American tourist visiting the Dominican Republic with her fiancé, Terry, difficult to fathom as well. Perhaps some of it could be explained by the love/lust spell she is under, but she clearly suspects what Franklin has done to her, and her changed feelings towards a man she has known for five minutes makes no sense, at least to me (sorry, I am trying to avoid spoilers). Much of the action and events require a great deal of suspension of disbelief, but not more than is usual in the genre.

The novel keeps wrong-footing the readers. At first, we might think that everything that is going on can be explained by self-suggestion and that all the evil (and the good) is in the mind of the believer. These are desperate characters holding on to anything that offers them a glint of hope. And later, when bad things start to happen, it seems logical to believe that the characters we are following have acted upon their negative thoughts and impulses (and even they have doubts as to what they might have done). But nothing is quite as straightforward as it seems.

Although there is plenty of explicit violence and some sexual references (those not as explicit), I did not find it frightening or horrific as such. However, it is a disquieting, dark, and eerie book, because of the way it invites readers to look into the limits of morality and right and wrong. Is revenge ever justified? Is it a matter of degrees? Who decides? It seems la Santa Muerte has very specific thoughts about this, so be very careful what you wish (or pray) for.

An eye-opener with regards to the Saint Death cult and a book that will be enjoyed by readers who don’t mind supernatural novels with plenty of violence, and prefer their plots dynamic and action-driven.

When an enigmatic town doctor saves the life of Anisa Worthington’s dying son, she abandons Christianity in favor of devotion to the cult of Santa Muerte or Saint Death. Some believe the mysterious skeleton saint will protect their loved ones, help in matters of the heart, and provide abundant happiness, health, wealth, and justice. But others, including the Catholic Church, call the cult blasphemous, evil, and satanic.

Anisa introduces Saint Death to her friend Helen Randon, and soon one of Helen’s enemies is brutally murdered. Residents of Montague, a peaceful little town in Prince Edward Island, begin plotting to rid the Bible belt of apostates.

Anisa suspects Helen is perverting the good tenets of Saint Death. Before she can act, a terrible nightmare propels her to the Dominican Republic in search of Franklin, her long-lost and unstable brother, who mysteriously disappeared without a trace twenty years ago.

To her horror, Anisa learns Franklin is worshipping Saint Death with evil intentions. As a fanatical and hell-bent lynch mob tightens the noose, mysterious murders begin occurring all around Anisa. Unsure who’s an enemy and who’s an ally, she’s thrust into a violent battle to save her life, as well as the lives of her friends and brother.

He worked as a print journalist for many years before becoming an author.

Currently living on an acreage in Prince Edward Island, Blackwell loves to travel and write fiction.